Eyes forward, look what’s happening – improv is coming to Liverpool! You couldn’t make it up but what does it actually mean? Well fortunately Emma Bird of Liverpool Comedy Improv was on hand to explain.

Improvisation is making up scenes, stories, sketches, characters, dialogue, on the fly, without planning or a script. Originally used as an essential actor training tool in rehearsals and auditions, over the last few decades it has evolved into an art form in its own right with trailblazing performers such as Robin Williams and Tina Fey, Amy Poehler and Will Ferrell, all coming from an improv background.

Improv performers learn quickly how leap into situations and scenes where they don’t exactly know what is happening immediately or how the scene will end. 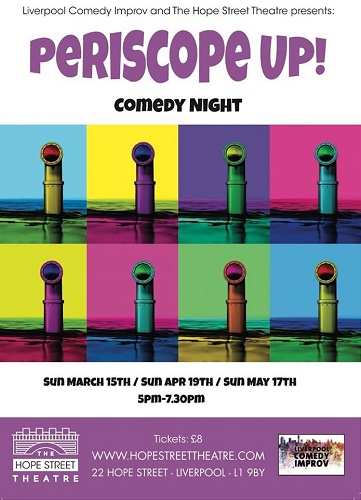 By relinquishing control and focusing their attention on their scene partner, no matter how many times you might see the same scenario you will never see the same scene or outcome because there is no given script, no planning, and the dialogue is spontaneously spoken.

Periscope Up Comedy Nights are a co-production between Liverpool Comedy Improv and The Hope Street Theatre offering three early evening Sunday night comedy shows over the next three months and hopefully beyond. Each night will be hosted by Liverpool Comedy Improv giving audiences a chance to take in some of the hilarious and talented improv comedy teams from Liverpool with guest headliners coming from Manchester, Sheffield, Wigan, and London, adding to a great night out.

Headliners for March are Sheffield duo, Between Us, who will improvise a 40-minute play called Sex, Lies, and Improvisation, inspired from anonymous audience suggestions about any secrets or lies in their current or past relationships.

Scheduled for April is a headline act from Manchester, Murder Inc, who take an audience suggestion and improvise a comedic murder mystery, with support provided by Casino Improv from Wigan who will improvise a creepy horror story, The Invocation, which has a touch of Tim Burton about it.

In May the headliners are another team from Manchester called Absolute Onions who take a classic karaoke song suggestion from the audience and improvise the unknown story behind it. Support comes from London act, Dr Whoprov, who take made up titles of never seen before Dr Who episodes and improvise them.

Bird adds that this eclectic mix each month means the audience are guaranteed a variety of different styles of improvised comedy with unexpectedness, surprise twists and turns, never seen before stories, relatable and hilarious characters, and scenes that may be moving and will definitely be funny. She is keen to add that this is not about dragging up or singling out members of the audience, as can happen in stand-up comedy, here the audience input is the ideas and suggestions for the improvisers to simultaneously turn into a rewarding and very funny evening of entertainment. It sounds great, sign me up!

Periscope Up Comedy nights are scheduled for 15th March, 19th April, and 17th May – all Sundays – with performances from 5pm - 7.30pm at The Hope Street Theatre, Liverpool. Tickets can be booked at http://hopestreettheatre.com/whats-on/

Emma Bird is an improviser, teacher, and professional actor and director. She created Liverpool Comedy Improv, a leading teaching school in improvisation, in 2015. She runs weekly improvisation classes on a Monday night at The Fly in the Loaf pub on Hardman Street as well as teaching improvisation at Merseyside Academy of Drama. Further information can be found at www.liverpoolcomedyimprov.co.uk