'Blink,' is a play written by Phil Porter a British playwright that gained good reviews from the New York Times back in 2014. Today it's been brought to the Kings Arms, Salford for Greater Manchester Fringe festival by the Squabbling House Theatre Company. Slotting neatly into today's digitally obsessed world that means people are constantly absorbed in their mobile phones, twitter accounts and email it is very relevant.

Squabbling House hail from York and are a relatively new company, they are playing for one night before they head up to Edinburgh festival so just time to catch them before they go. The company comprises of Liddie Harper who plays introvert Sophie and Angel Lloyd who takes the role of misfit Esther. 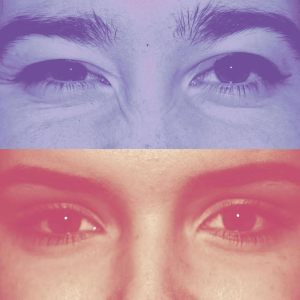 The set is simple yet impressive, speaking volumes about the tone of the drama. A bunk bed with a duvet that's seen better days and a teddy sat on the pillow evoked memories of childhood comforts and security of home. The two actors play characters that seem to have lost their footing in the world compounded by grief and family illness. They powerfully, yet subtly with great sensitive awareness unveil their personal tragedies and series of fortunate events that lead them to meet. Not forgetting that this is a romance, you'd be forgiven for failing to realise it given its obscure take on dating, but it is heartfelt.

Coincidently the two likeable protagonists have a lot in common we discover through perfectly timed quips and the build-up of romantic if awkward tension. The play explores relationships between parent and child and also carer and patient, so watching you can identify with many issues they have to contend with, such as the way life has a habit of catching you out, when fate changes things in the Blink of an eye.

Liddie captured the grieving Sophie to a tee, the way she frets over everything, over analyses and obsesses about her father's death. She is the one who begins the bizarre (yet hilarious) courting ritual that revolves around a lot of the public transport system in London, and even the London Eye, where you are desperate for them to actually communicate.

There were some funny moments too. Angel takes on to a tee the role of a patronising, shallow employer who is about as unsupportive as anyone could be, reflecting today's throwaway culture of hire you fire you zero hours contracts working culture. Sophie's German artist is also memorable as an incidental character.

Noticeably there was a great synergy between the two actors throughout, powerful yet subtle they made the characters endearing to the audience and real. Funny quirky moments, such as the woman who 'smells of tomato plants,' and the strange pillar box obsession give this writing its personality and shine.

Blink is warm-hearted, human, the ending may not be what traditional romantics wish it to be, but I found it sweet and lovely, with a very healing, human message.