Alan Ayckbourn is one of Britain’s most prolific and popular playwrights. His canon of work stretches from the brilliant Norman Conquests Trilogy to the sublime Woman in Mind (probably one of my favourite pieces). Ayckbourn is a writer who isn’t afraid of mixing high drama with black comedy. He is richly sublime in every aspect of his writing for the theatre and a prime example of this is presented here with Keyhole Theatre’s latest production of A Chorus of Disapproval. Keyhole was founded over 10 years ago by Ann Bates and this local company certainly goes from strength to strength having performed in most of the local venues around the Merseyside area.

In a nutshell, A Chorus of Disapproval is basically “a fish out of water” story about a lonely widower, Guy Jones who joins the Pendon Amateur Light Operatic Society (PALOS for short) and naively finds himself rising through the ranks of the small troupe of amateur performers to take the lead in their version of John Gay’s The Beggar’s Opera. The trouble is Guy can’t say no and he soon finds himself in various relationships and complicated situations. The play cleverly juxtaposes music from The Beggars Opera with the core of the main action.

With A Chorus of Disapproval Ayckbourn constructs a musical play within a play and even though it is incredibly dated by today’s standards it still remains one of his strongest pieces for the theatre, mixing broad farce, dramatic tension and exuberant musicality.

This play is a big undertaking for any theatre company having to balance the delicate nuances and complexities of the script, but I’m pleased to say that Keyhole Theatre rose to the occasion in quite an admirable way. Directed by Ann Bates, the fifteen strong cast worked their way through the complex maze of Guy’s ascent to theatrical greatness and Bates got some great performances from Adam Byrne as the bewildered Guy and Noel Ross as Dafydd Ap Llewellyn the ever so slightly unhinged director. Also, worth a mention Susan Eyo as the frustrated wife of Dafydd and Irene Morrison as Rebecca Huntley-Pike, a witty and sardonic character if ever there was one! All other members of the cast worked very hard throughout but its Byrne and Ross who stole the acting honours on the night.

I did feel that some of the transitions were a little sloppy and could’ve been tighter and sometimes dialogue delivery seemed to jar a bit – opening night nerves I reckon. The set was very minimal and it would’ve been nice to see a little more contrast and a splash of imagination in its design. The first act was a little sluggish, but the second act packed a punch and was certainly full of energy – the cast were really getting into their stride by this time. Jez Wing provided strong musical direction throughout the production and certainly added a lightness of touch as Mr Ames.

This was a pleasant rendition of a complex Ayckbourn play and Keyhole Theatre Company certainly met its many challenges. 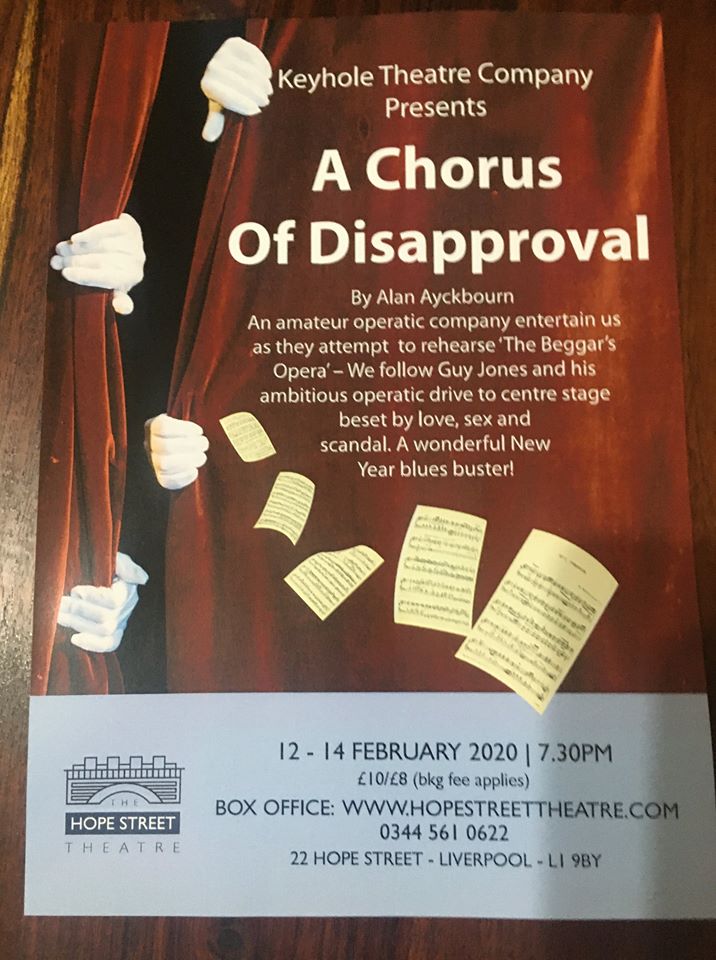