In 2003 Britain invaded Iraq, citing that national security was under threat. Since then, evidence has come to light that Prime Minister at the time, Tony Blair unlawfully went to war, meaning that the soldiers who went there were there under false pretences. What’s more, is that this war led to the collapse of Iraqi society and ultimately the formation of the terrorist group; Islamic State. The Chilcot report, due to published this year, aims to discover if Britain did unlawfully go to war with Iraq.

As I entered the theatre, it was nice to see the stage laid out like an actual tribunal hearing, with the audience on both sides of the stage. However, as the play started it soon became clear that it would just be a reciting chunks of the actual enquiry. Due to its slow pace and lack of engaging content, it’s no surprise that within 30 minutes a significant amount of the audience had fallen asleep. 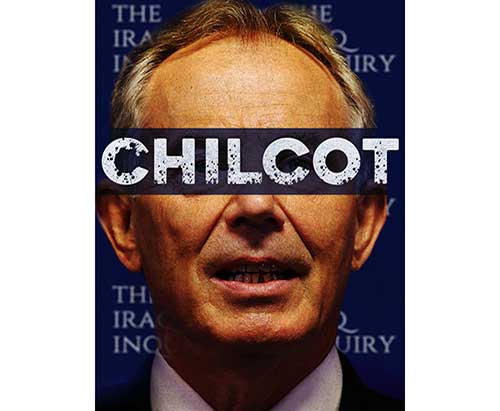 The main problem with Chilcot is that it is incredibly dry. We are witnessing what happened in the courtroom, with five committee members and a number of witnesses. As with many upper-class British people, they tend to have a problem expressing emotion. This is fine as, in general, this is a cultural trait of Britain, however it is dull to watch.

It was quite difficult to follow the plot, unless you had some background knowledge of the inquiry. The actors did a good job of trying to make each character individually distinguishable, but there wasn’t any introduction given as to why their evidence would be of any significance.

The language used in the play was very formal and it difficult to engage with. There were a couple of times when we left the courtroom and looked at the lives of those affected by the Iraq war. This was a nice break from the formality, however some of the actors found it difficult to switch from serious committee member to someone who lost their son in the war.

On a whole Chilcot didn’t highlight anything new about the war in Iraq. It was clear from this play that Tony Blair lied for his own self-interest. However, this is something that the majority of people already knew. So there was nothing new here, but I guess their hands are tied until the results of the inquiry are released in July.