Many people know Derren Brown from his bizarre and mind-boggling TV shows. His new show; The Miracle sees him performing in theatre venues across the country. After watching the show it’s very clear to see how he got to where he is today.

The Miracle takes the audience on a journey and shows us that the power we have in our minds can shape and control our lives - we can stop feeling pain if we don’t think it’s there, we have more power than we think we have.

However, that’s not to say that Brown didn’t mess with my head, because he did, on numerous occasions. From this show you get to see just how smart this guy is and he knows how you’re going to react before you do. Some may class this as an incredible gift, however, some of us as human beings are very ‘readable’ and give the game away very easily. Brown just knows how to spot these signs.Through audience participation, Brown controls the audience with ease. What was interesting is that he controlled what we were thinking. Brown foresaw events that would be near to impossible to predict. 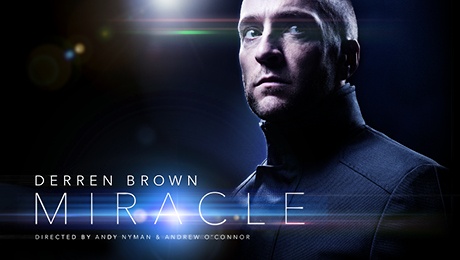 What makes Brown’s performance look even more astonishing is that he does with ease. The slickness of his show is incredible. He oozes confidence and intelligence, and to top it off has great stage presence.The show is also a wash with comedy moments, a couple from Brown but also from the interactions with the audience. It’s amazing what the first thing people think of when asked to think about something.

Brown’s publicity team have specifically asked for the show’s contents not to be revealed. Which is the right for this act, as it would spoil the element of surprise, which is something that Brown relies heavily on.

Anyone that is thinking about going to see the show needs to be aware that you may be asked to join him on stage. I’m sure every member of the audience felt a slight sense of nervousness throughout, thinking they could be next.

Brown is a great observer of people, and his career is forged on reading people. He is conscious of the subconscious and their meanings. I guess the theory of ‘you cannot not communicate’ is definitely true.As with every show of this kind, there are going to be sceptics. A couple we even present in the audience and Brown managed to make them believe. Even if you like to be challenged, you won’t be disappointed.

Leaving the theatre, I heard many saying ‘how did he do that?’, and many other questions that can’t be answered. However, it is clear though from watching the show all these things happened because Brown believed they would.