HMS Pinafore is a comic Opera in two Acts and was Gilbert & Sullivan's first international sensation in 1878.   As with all Gilbert & Sullivan productions, it is a bit of an insane storyline with their trademark use of clever word play in the songs. It is the story of love between social classes.   It makes fun of the British class system and has a pop at patriotism, party politics and the rise of unqualified people to positions of authority. (Just imagine what a field day Gilbert & Sullivan would have if they were alive today – particularly in view of our current political upheaval...!)

We follow the story of the sailors on board the HMS Pinafore and in particular, the attraction between Captain Corcoran's daughter, Josephine and lowly seaman, Ralph Rackstraw.   Josephine is destined to marry Sir Joseph Porter, First Lord of the Admiralty but in spite of all the odds – and with the addition of a rather ludicrous plot twist – true love prevails.

This production, directed by Sasha Regan, is an all male cast and it works brilliantly. In fact, I believe it would not be a fraction as entertaining or amusing if it was a mixed cast as a great deal of the comedy and humour arises from the fact that the women are played by men.   However, this is not done in the form of drag or 'ubercamp'. There isn't a frock or a bonnet in sight – the women are denoted by the wearing of a neckerchief and a hair accessory and that is all - the actors are still wearing their seaman costumes.   Josephine wears some netting as a shawl and all in all, the costuming is very effective. It would have been very easy to overstate the women's appearance and overemphasise it but the overall effect worked really well and made it funnier really. 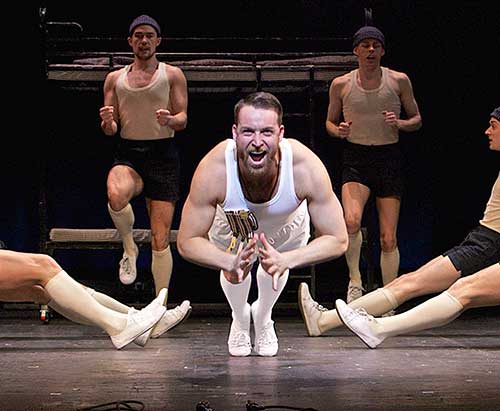 It doesn't seem fair to single anyone out for special mention as absolutely everyone (sixteen actors in total) in this production worked very hard and was extremely entertaining. However, I really must mention Neil Moors as Captain Corcoran, David McKechnie as Little Buttercup, Michael Burgen as Sir Joseph Porter and Richard Russell Edwards as Hebe.   The comedy generated by them was hilarious. As soon as Captain Corcoran made his appearance, the comedy really kicked in.   Put together with Sir Joseph, they formed a real comedy duo.

Ben Irish, who played Josephine managed to capture the essence of girlish excitement and coyness perfectly - and what a voice!

The set was very simple, made up of three sets of bunk beds which were also used as various props.   What I really liked was clever use of a piece of rope held by two actors which symbolised the edge of the ship.   Simple but extremely effective.

All those who played women (the cousins, sisters and aunts of Sir Joseph) were absolutely brilliant.   It wasn't over the top but it was silly enough to be funny without overdoing it.   The feminine gestures and coy looks, not to mention the elegant stance and rather astonishing falsetto singing was absolutely wonderful.   Credit to Sasha Regan for deciding to go down the all male route, it really worked and I don’t think a mixed cast would have had as much of an impact as the all-male cast.

Ironically in this all male production, equality is one of the main themes of HMS Pinafore and a quote I particularly liked was "when people obey other people's orders, equality is out of the question".

The second half saw some cast members running through the auditorium with torches and I thought this was done very creatively, with Dick Deadeye (James Waud) proving to be a bit of a surprise to the audience member he appeared next to!   It provided much amusement and was a good idea.

During "Never Mind the Why and Wherefore", I really liked the subtle use of boxes at different heights which I assume symbolised difference in social standing and rank...and which kept being removed to bring everyone down to the same level.

A nice touch was that the show ended in much the same way as it began – with the cast gathered on and around the bunk beds singing. They cleverly cast off their female accoutrements and it was almost as if everything which had gone before hadn't actually happened.

An observation I would make is that I didn't feel that the sound was of the best quality.   I found some of the singing to be a little tinny and I would have expected the sound of the voices to be more resounding than it was.   Also, my theatre companion and I struggled to distinguish the words in some of the songs and as such, some of the plot was lost on us.   The piano drowned out some of the singing, particularly of those actors whose voices were a little on the quiet side.

During the interval and on the way out of the theatre, I could hear lots of people humming various songs from the show and I thought that was lovely – who would think that an operetta written 138 years ago would still have resonance today, never mind have people singing along afterwards. Sadly this is something to which not many modern shows can aspire.

This production brings a fresh approach to Gilbert and Sullivan – it retains the tradition but also injects a few contemporary touches (if you go and see it, do listen out for a few bars of "Chariots of Fire"). Credit to all those involved for making it so much fun.

HMS Pinafore continues at The Lowry until Saturday 16th July.   Try to jump aboard before she sails away!