A13 and North West End LIVE are proud to present Burglars by David Rudkin. Burglars will be performed over 3 nights in June at Theatre Pop within Bar Pop in the heart of Manchester City Centre.

Six rather inept and clumsy burglars enter the large detached house of a wealthy man believing him to be away on holiday. However, what they find out about his whereabouts and his activities will both shock and amuse! Written all in verse, this written-for-radio play for voices tells a very (in)human(e) story in the most light-hearted, frivolous way… but still asks the question, what would you do if you were caught in an ethical quandary? 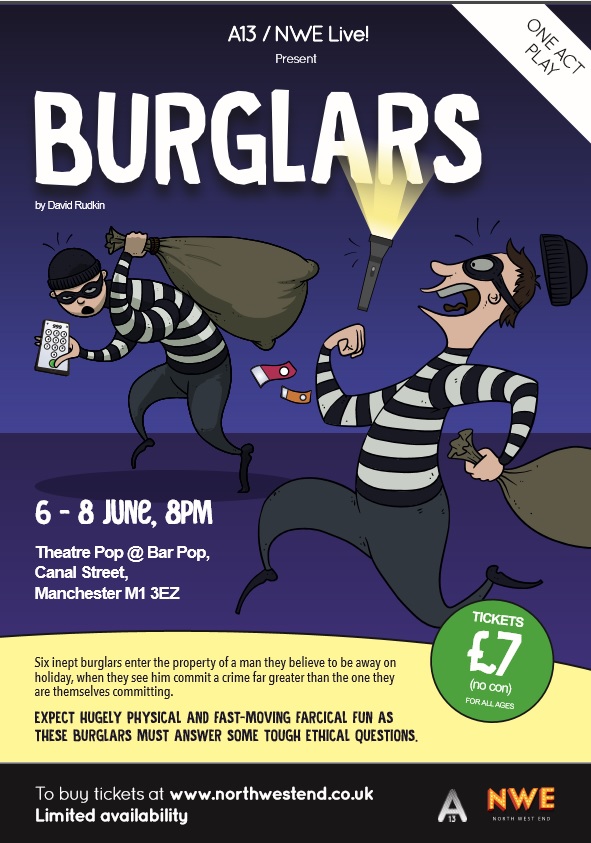 Tickets priced at just £7.00 (plus booking fee) can be purchased HERE and a number of tickets will be available to purchase on the door subject to availability with no booking fee.

North West End LIVE! Is a brand new production company set up to produce the best of independent theatre in the North West. Working with some of the most talented actors and directors in the region our aim is to bring both new and established work to the audiences of the thriving theatre scene in the area.

A13 was formed in 1989 as a Youth Theatre Company holding drama classes in North Manchester. The company has undergone a couple of changes since then, and now exists primarily as an English Language Teaching Theatre working mainly in central Europe. They provide workshops, classroom support, and whole theatre projects including directing school plays and Musical productions, all in English as a stimulating and alternative way for students to engage in a foreign language. The company also work with and train young adults either still in training or recently graduated whose first language is not English.