A quintessential British musical paired with an enormously enthusiastic local amateur dramatic company. Annes-on-Sea Amateur Operatic and Dramatic Society are delighted to present their 2016 production, 'Betty Blue Eyes'. Set in the war time era, this loveable musical gives us innuendos, musical references and perfect harmonies all rolled into one sell out show! Based on the 1984 film "A Private Function" and most recently performed in the critically acclaimed show starring Sarah Lancashire.

The plot seems bizarre it's true but try to stay with me, in a typical northern town, rations are low and frustrations are high. Our leading man is Gilbert Chilvers, a chiropodist and rather handsome man around town. 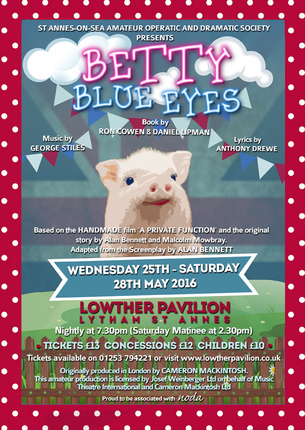 His wife, Joyce is a piano tutor and has always dreamed of doing more with her life. Joyce’s mother (Mother Dear) is rather disapproving of Gilbert and doesn’t stray away from making that perfectly clear. It is apparent from the beginning Joyce and Gilbert are looking for a better life, and they are prepared to do whatever necessary to make it so! The only happiness this town seems to bask in comes down to the impending marriage between Princess Elizabeth and Prince Phillip and also unbelievably a blue eyed pig, whose named, you guessed it Betty. Through the side splitting number of bunions, a puppet pig and even Princess Elizabeth herself – there isn’t much this show is missing.

James Quine plays the nervous Gilbert Chilvers, with a strong voice and terrific physical comedy, he is a wonderful leading man. Joyce Chilvers, beautifully performed by Danielle Wrench - she gave such feeling and passion into her performance but was unfortunately let down by her soft voice and a few hard to hit notes. A true professional Vera Cummins (Mother Dear) had great comedy skills which had the audience latched onto her every word. Leo Appleton played Inspector Wormold (The most villainous character in the show) and excelled especially throughout the number ‘Painting by Heart’, displaying a brash and baritone voice and paired well with the rest of the company. Dr Swaby, performed with gusto by Neil James, gave us a real mean character with lots of excellently performed scenes- not having a strong voice but his interpretation of the part more than made up for it. More great performances that shone were those of the Lionhart Dancers, not only being enthusiastic and exciting in movement but having perfect pitch harmonies which worked together perfectly- a real alluring sound. The real stand out star of the production comes from Michael Cosgrove (a perfect interpretation of Mr Allardyce) a terrific voice in addition to his stand out comedy skills and witty lines. Especially throughout the song ‘Betty Blue Eyes’ a wonderful and memorable performance.

The costuming for the production was tremendous, instantly taking you to another place and making you reminisce of days gone by. The set changes were unfortunately very loud and slow, not helped by the no music in-between scenes, something I hope will be easily ironed out by the second night of the production. Music was lively and joyful, played wonderfully and gave a real boost to the performances onstage when playing in unison. A perfect night out with classic songs, scenes and character. The production runs until the 28th May so get your tickets whilst you can!

Booking can be made at https://www.lowtherpavilion.co.uk/