If I Were You - Bolton Little Theatre, Bolton

Alan Ayckbourn is one of Britain's best known playwrights. If I Were You is one of his most recent works, published in 2006, following the story of a married couple who one morning wake up to discover they have swapped bodies. Believe it or not, this is actually Ayckbourn’s 70th play.

The first act sets the scene of a couple who are very much on the rocks; Jill is depressed, spending most of her day in her dressing gown, and Mal is having an affair. Jill knows Mal is cheating on her, but she fears what will happen if she does confront him about it. Jill’s character is very soft and sympathetic, whereas Mal displays traits of sexism and masculinity. The couple have two children; Chrissie who is grown up and left home (yet leaves her baby in the car for what seems like hours on end) and Sam who is still at school and loves acting. 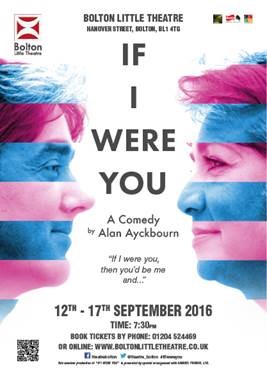 While Act One does paint the picture of the couple’s life, I felt like it did drag a bit. The acting was extremely poor, especially Chrissie who sounded like she was trying to pronounce every letter in every word, she came across as very unnatural and forced.

Although the play is largely a comedy, it does touch on scenes of domestic violence as the couple's daughter Chrissie is being abused by her husband Dean. Issues like this need to be handled very delicately, as not to make a mockery of it. Sadly it didn’t work on this occasion, the actors did not have the experience to pull it off and the directing choices did not match with the emotion of the scene - the audience were laughing!

The set looked smart, it looked like any modern day home. It also doubled up as Mal’s workplace - a homeware department store. The lighting was on point throughout, I especially loved the change to reflect that the TV was on.

Act two is very much the highlight of the play. The energy is taken up a notch when Mal and Jill swap bodies and have to live a day as each other, while all the other characters remain clueless as to why they’re behaving so strange. This is where the fun begins and the acting improves, it seemed like both actors were enjoying it. Although I did witness some character traits taken on that weren’t there in Act One.

If I Were You is an enjoyable play. Although it does take a while to get going, the body swap scenes are good fun. It’s a pretty harmless play that won’t set the world on fire, but it’s still worth a visit if you’re in Bolton this week.

The production runs until the 17th September.  For full details and to book tickets visit www.boltonlittletheatre.co.uk