York Light Youth present the popular West-End Musical CATS, based on the book "Old Possum's Book of Practical Cats by T.S. Eliot. Cats first premiered in the West End on the 11th May 1981 and was composed by Sir Andrew Lloyd Webber. Webber started writing in the late 1970s, and Dame Judy Dench was initially set to play the starring role Grizabella, however she was forced to pull out due to injury so was replaced by Elaine Page. The musical tells the story of a tribe of cats called the Jellicles and the night that they make what is known as "the Jellicle choice" and decide which cat will ascend to the Heaviside Layer and come back to a new life. The song "Memory" became to be a huge hit after being made famous by Elaine Paige and is instantly recognised as being a well loved song from the show.

York Light Youth was founded in July 2013, aiming to nurture and develop young performers aged 11-18. Bringing high quality musical productions to York city centre well providing the opportunity for young adults to perform and develop. Previous productions include Joseph and The Amazing Technicolor Dreamcoat in October 2013, Les Misérables in October 2014 (gutted I missed out on seeing this one!) and most recently Honk! in May 2015.

I was excited to discover that one of their forth coming productions is to be "Seven Brides for Seven Brothers" in June/July 2016 performed by their parent company, York Light Opera Company. Having only recently being introduced to this particular musical myself earlier this year when only weeks after relocating from North London back to Yorkshire where I grew up, my friend surprised me with tickets to the recent production at Regents Park Open Air Theatre, that I realised what a fantastic musical it is. I eagerly await York Light Opera Companies production of this wonderful musical.

This evenings performance of Cats, despite it being one of the very few musicals I have point blank refused to go and see in the West End (I see a LOT of West End shows, however this particular one has always had little appeal to me), held my concentration throughout the evening. After battling through thick fog and struggling to find this theatre once we had left the main roads, my brain was not in the best place to concentrate on an unknown musical having known very little about the show until this evening. The dancing was simply stunning and after I had picked my jaw off the floor after witnessing an outstanding performance from Olivia Rippon as Victoria - dressed all in white with short grey curls, Olivia performed an amazing solo en-pointe with such grace and elegance. From the second she first began to perform I found it difficult not to focus on her throughout the entire show, such an amazing dancer! I myself trained in classical ballet for many years albeit intermittently due to ill health so know just how much stamina in required.

Bearing this in mind, the entire cast not only performed perfectly in sync with each other (my eyes were drawn mainly to the feet, watching for any foot slightly out of time) but did so whilst performing some high energy routines and signing at the same time. Each cast member from the oldest to the youngest danced with such skill, passion and energy. There were some strong singers and some not so strong singers, but Naomi Halliday - playing the role of much loved favourite character Grizabella, earned such passion from the audience with her pelting performance of "Memory". Wow what a voice!! Naomi - your voice was MADE for musical theatre!

I was delighted to see a good mixture of both male and female dancers. Back in my day a male taking lessons in a dance school was a rare sight, I think in over 25 years of dancing I only ever remember there being one male in any of MY dance classes but I am glad to see that this has changed in recent years as there are so many opportunities for male dancers nowadays and this production certainly wasn't short of talented male dancers.

The choreography by Hayley Patrick-Copeland was fantastic but with such highly skilled dancers, they really brought the story of the Jellicle cats to life.

York Light Youth as a theatre company may only be a couple of years old, however with the highly talented cast witnessed this evening, they are destined for a successful future and I for one would love to be a part of that future and see what other talented young performers they can being to the city of York and turn into bright shining stars of Musical Theatre.

Bravo! You have left a lasting "Memory" not only in my mind but within my heart. 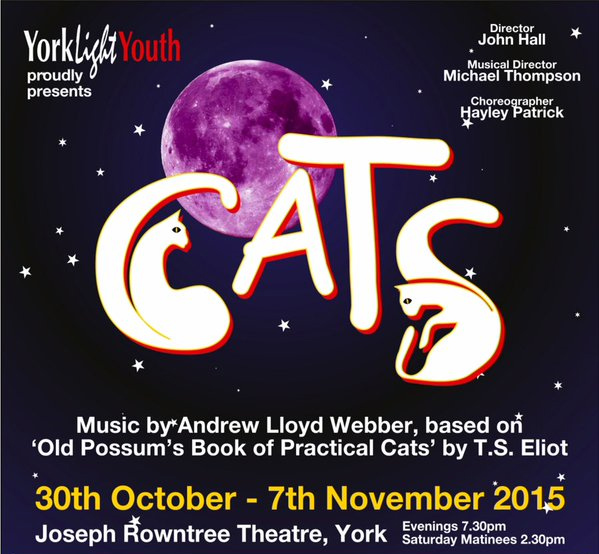