After what seemed months of waiting in excitement, last night was finally opening night at the aptly named “Theatre Impromptu” (a pop-up theatre set within Thurlstone St Saviours Church) of Endellion Theatre Company’s adaptation of the much loved Andrew Lloyd Webber musical “Evita”.

The adverts both on local radio station Penistone FM & several large advertising banners with teaser photographs of the three main characters (Fiona Walker as Evita, Mark Holmes as Peron and Matthew Walker as Che) scattered in and around the rural villages adjacent to Thurlstone, have helped build up my excitement to see what Penistone FM described as “a new adaptation” of the much loved musical.

Based on the incredible true story of Eva (Evita) Peron who started life as a poor working class girl with big ambitions who went on to become an actress, sleeping her way to the top and later becoming the wife of the President of Argentina, Juan Peron. It’s a story of love and politics and shows all the battles and triumphs Evita endures during her short but amazing life. 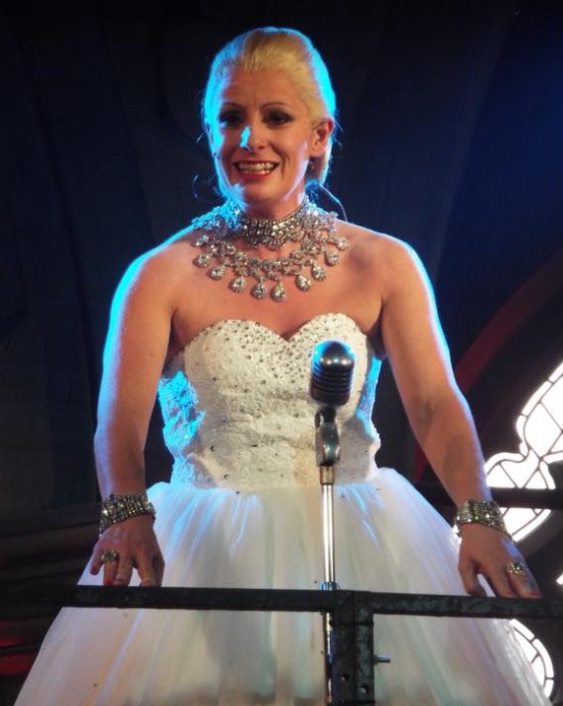 Thurlstone Church has undergone a makeover to accommodate the production; from all the pews being removed, stained glass windows temporarily covered with black out curtains, an area set up to accommodate a large live orchestra, scaffolding and a level platform stage are just a small fraction of the transformation to create this simple yet highly effective production set up.

Despite several missed rehearsals due to the unfortunate spates of heavy snow, the overall professional feel of the production wasn’t tarnished in any way. From the opening scene of Eva’s tragic death announcement the stage was awash with colourful 1940s dresses and military wear, reminiscent of the decade, setting the scene perfectly.

There were times during Act One when there were a few near misses with cast members bumping into each other or props (a wooden chair, a wooden box) but were casually able to move on without further hindrance.   The full cast when singing numbers together were clear and in perfect harmony but at times, particularly with both Matthew (Che) and Fiona (Evita) parts of their solo songs were often drowned out at times by the band, noted by others around me during the interval. The intimacy of the venue and the bands close proximity to the stage and audience along with the high ceilings on concrete pillars in the church were both a blessing and a curse to the audio of the production.   The choreography, particularly with the younger ensemble was to a professional standard and one of the productions highlights for me.

Other than a few microphone problems, Fiona Walker gave a sensational performance in the title role of Evita. Vocally the emotions were there but at pivotal moments such as the final tragic scenes, due to the company’s adaptation I felt some of the emotion was lost. A vocal highlight of the performance for me was moving performance of “Another Suitcase in Another Hall” by Gina Townend as Perons’ Mistress. Matthew’s vocals were clearer during “High Flying, Adored” where we got to appreciate his spellbinding voice. A familiar face was Mark Holmes as Peron, who I’d previously seen in another Theatre Companies production of Rock Of Ages as the comical character Lonny, so it was great to see him excel in a more serious role. Overall the production ran smoothly was deeply engrossing, so much so it seemed to be over in the blink of an eye and I left wanting more. Unfortunately for me the rest of the run (until 15th April) has completely sold out. After last night I see why!