Roll up, roll up for The Unfair

‘In this world nothing can be said to be certain, except death and taxes.’

So said the American politician and philosopher Benjamin Franklin, and now performance maker Ellie Harrison is looking at the anger generated as part of the classic seven stages of grief, but in a fun way as her The Unfair interactive installation rolls into Leeds and Brighton.

“The Unfair is a fun fair filled with different games and stalls to help people think about anger,” says Ellie. “Normally we think of anger as quite a destructive emotion so I guess the Unfair asks whether it could be a source of positive change?  Essentially anger is like an energetic state so The Unfair it asks people to consider what they do with that energy.”

Unfair is the fourth part of Harrison’s The Grief project designed as a series of enjoyable installations and artworks based around the stages of grieving .  The Unfair has been created with Leeds based artist Adam Young and professional performance designer Bethney Wells.

“People get a ticket when they arrive where they choose four stalls, so they have to choose wisely as there are different stalls for them to interact with. So, for example, we have the bottle it up bar where you can wrote a really abusive letter to your ex, your boss or next door neighbour you can’t stand. We’ll bottle it up for you, so you don’t have to, and you’re in no danger of pressing send. 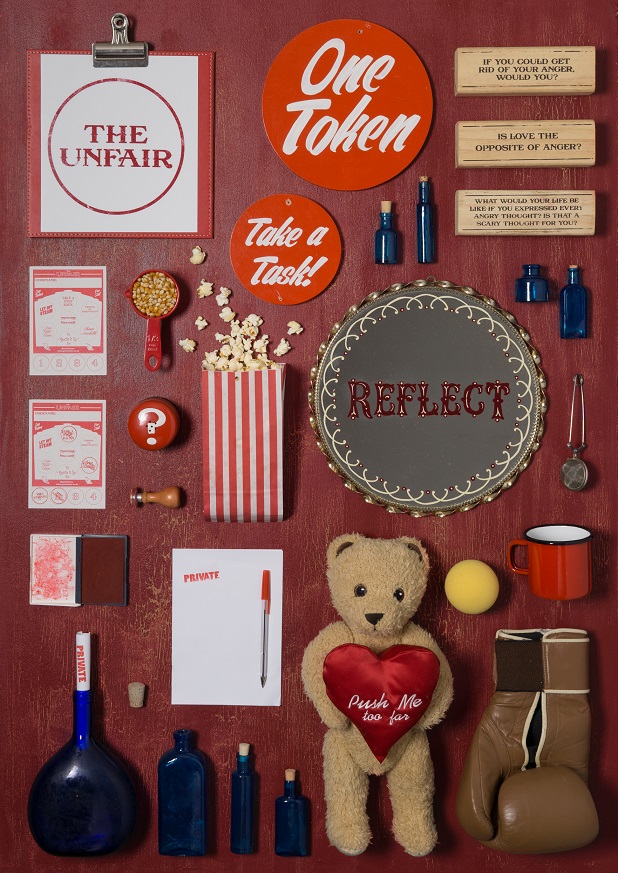 “If you want to do angry karaoke you can pick your favourite angry song, and then you go into booth with a punch bag for the duration of that song and let rip – scream, sing or punch it out. We have a more reflective space where you have a cup of tea to reflect in a quiet environment.”

As well as the anger many people naturally feel when they lose a loved one, this piece is very timely given the anger created in our fast paced, volatile society by the Brexit debate, the election of an orange buffoon to the White House and the upcoming general election.

“We live in a society that encourages us to go faster and faster, pack more and more into our day, so what I’m interested in doing is giving people the space to unpack some of those things,” muses Harrison. “We don’t often get time to reflect so The Unfair is there to encourage people to slow down and have a think about things.

“I’ve found that humour is a really useful tool in talking about difficult subjects. If we gathered up a whole of people and said ‘anger, go’ it would feel overwhelmingly. But there is something about the structure of a funfair that allows people to engage in both a silly playful way and a profound way as well.”

As well as making the piece Harrison is providing a space for people to have fun and release their suppressed feelings to connect people in the real world in a way that the Internet or film can’t.

“We’ve had amazing experiences where people who have lived alongside each other - but never spoken - have started to have conversations engaging with each other that I’ve found overwhelming and quite moving,” recalls Harrison  “In an increasingly digital world to give someone your time and attention without checking Twitter is a radical act. For this half an hour we are going to have a chat about things.

“The grief series is seven projects long which is brave and quite stupid. I’m up to part five and researching part six, but I reckon by the time it is over it will a decade’s work, which is quite a commitment to talk about death for 10 years.”

Harrison has some scepticism towards the seven stage model as grief is rarely a linear process as people struggle to make sense of their loss in very different ways. That said dying is a given for all of us so opening The Unfair at Leeds Kirkstall Abbey during the national Dying Matters Awareness Week  makes perfect sense.

“It’s about breaking down the taboos and creating a welcoming and entertaining space where people can talk about these difficult things without a sense of shame. I made a show about my experiences of bereavement,  but I was really surprised  when people came up afterwards saying that really reminded me of when I lost my parents, my partner, my child or my sibling so I became this grief magnet.

“There is a real desire to talk about it so could I create projects for people to have the space to have this conversation? I felt a weight of responsibility – in a good way - to amplify all of these incredible stories people had told me.

“We’ve had five year olds coming and having a great time and we’ve had 85 year olds doing the same.

The Unfair is free entry and is open at Leeds Kirkstall Abbey May 9th – 14th and then the Brighton Festival from May 18th -21st.