As part of ¡Viva! Spanish and Latin American Festival 2018, HOME presents Corrido de la Sangre, a brand-new HOME production from the provocative, avant-garde Godfathers of alternative cabaret The Tiger Lillies. Described as the forefathers of Brechtian Punk Cabaret, the group have found worldwide recognition for their unique sound and style that merges the macabre magic of pre-war Berlin with the savage edge of punk.

Playing from the 20th April until the 5th May a Corrido singer and his band return from the realm of the dead to haunt their killer and present a dark story of intrigue, vengeance, murder and the mayhem of a romance gone bad. Set in a small dusty town in the lands between Mexico and the US, the singer relays the tale of his rise and fall and the songs of life at the border, where mythical creatures from Aztec times still haunt the night. This is a realm where folklore and real-life merge, where audiences meet a knight, an evil king, a damsel in distress and the Saint of the Sinners. 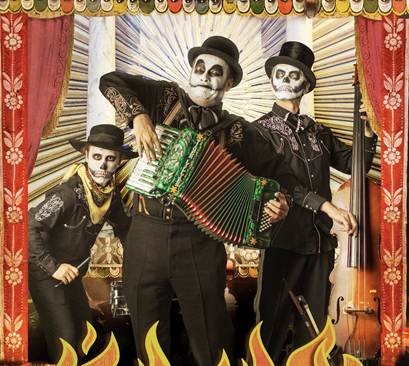 Martyn Jacques’s singing and performance on accordion, piano, harmonica, organ, ukulele or guitar is accompanied as ever by Adrian Stout’s multi-instrument playing, on bass, euphonium and musical saw, plus sepulchral backing vocals; drum duty is handled by Andreas Winter, with guest spots from Jacques and also Timm Brockmann, the master of the mix. For that essential extra quality, Christian Krille plays trumpet on just over half the tracks.

Martyn Jacques commented: “We are very much looking forward to coming to HOME to collaborate once again with visual director Mark Holthusen and writer Peder Bjurman to tell a great story accompanied by beautiful visuals set in one of our favourite places in the world, Mexico.”

Walter Meierjohann, Artistic Director: Theatre, HOME, added: “¡Viva! will return this season to brighten our Spring/Summer with a full and colourful cross-art programme from Spain and Latin America. In theatre, we are very proud to present the world premiere of a HOME and The Tiger Lillies co-production, Corrido de la Sangre, exploring Mexico and the ‘Day of the Dead’ – with a new and original score this must-see show will follow in the footsteps of Lulu and The Rhyme of the Ancient Mariner, promising to be a feast for eyes and ears.”

The Tiger Lillies’ album Corrido de la Sangre can be purchased on the band’s official website www.tigerlillies.com, as well as on iTunes, from Friday 20th April.