Pirate's Rock 2 The Souls of the Lost comes to Liverpool

From reviewing one pirate panto to previewing another, it was a pleasure to catch up with Barry Levy of City Entertainment Group to get the lowdown on the sequel to last year’s Pirate’s Rock.

Levy is quick to note that it is not essential to have seen the first one as a recap will be provided in the first two scenes as he elaborates:

In the opening play they battled raging seas, they overcame frightening myths and made it to a mysterious island called Pirates Rock. But darkness has risen, and pirate Finn Roberts has been revealed as Master of the Bone Force.

Now the adventure continues with pirate Grace Avery, Wreck, pirate Glam, Princess of Sea Hawk and many more, as for the first time ever we meet Pirate CJ Hudson and the rogue pirate Manson Kidd. 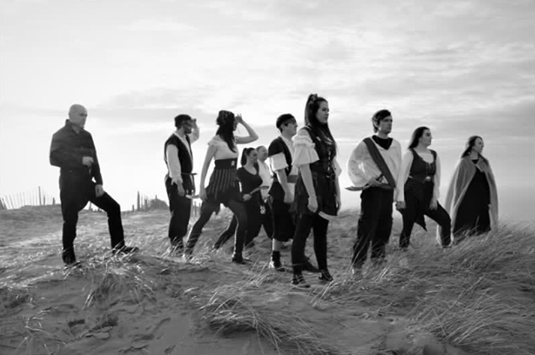 It all sounds quite intriguing. Levy continues:

Who will rise? Who will be defeated? When the sun rises who will lead the Souls of the Lost to new glory? When they fight they may break but the pirates must stand shoulder to shoulder and at their darkest time overcome evil, and maybe, just maybe, they will live to fight another day and new legends will surely be born.

I’m on the edge of my seat just hearing about it and really looking forward to seeing the continuation of this musical adventure and the return to the mysterious island that is Pirates Rock.

But how did all of this actually come about in the first place?

Time flies when you’re having fun, Levy explains, as he recounts the rollercoaster journey from the company’s launch in November 2018 with the comedy All Together Now, last April’s panto, Pirate’s Rock, and the darker Warnock in July 2019 which explored shortcomings in the care and justice systems.

Levy hails from North Wales where he accrued over twenty years of theatrical experience before relocating to the north-west. Frustrated at the lack of immediate opportunity with other companies and with his feet well and truly itching, he decided to do his own thing instead and started City Entertainment Group. The timing was perfect with The Hope Street Theatre having recently established itself as a vehicle for new companies to ply their craft.

Levy focuses on writing work that can appeal to anyone and everyone; theatre that will appeal to the very people that reside around the theatrical quarter of Liverpool; productions that will encourage to them to not only come and watch but actually to get involved. This is proper community theatre and is clearly working for Levy: he has an interested pool of people which means he has avoided auditions and used a blind casting approach which allows the cast to develop their own character and persona within each piece.

Levy notes the intention moving forward is to deliver three productions per year and following this production he already has Bow and Arrow, a show for adults rather than an adult show he is quick to clarify, in June followed by Destiny – a sci-fi panto based on Jack and the Beanstalk – in December.

After a period of hype in the Liverpool theatre scene, it is refreshing to meet someone as honest as Levy about where he’s from and what he’s hoping to achieve. I can only wish him every deserved success. Further information is available at https://cityentertainmentgroup.co.uk/

Pirate’s Rock 2: The Souls of the Lost performs at The Hope Street Theatre on Friday 7th February at 19:30 and Saturday 8th February at 14:30 and 19:30. Tickets are available via http://hopestreettheatre.com/whats-on/