This was the first full length play written by an established playwright that I have thus far had the privilege of reviewing for the students of The Arden School Of Theatre; as indeed this was who performed this play.

With a huge cast of 25 actors, many of whom play multiple roles; and with the actors themselves changing at certain performances, the programme looked more like a railway timetable than anything. It was also an exceedingly brave and also very odd choice of play to bring out of the school and into the public arena.

The play is set in Romford, right in the heart of Thatcher's 'true blue' countryside, and takes us through the six year period of 1985 to 1991, thus starting the play at the height of Thatcher's and the Conservative's 'reign', taking us through their downfall, the crash, to the beginning of a new era, Labour. The play is also semi-autobiographical; the boy in the title is indeed the playwright, and he has based the people and themes of the play around his own experiences working as a young boy on an Essex market stall.

I remember this time very well myself too. 1984 was the first year I was eligible to vote, and for a middle class white man there was absolutely no wavering. I knew, as indeed all of my friends knew, on which side of our bread was buttered. We also looked down on the lower classes, (ie; market traders) and were indeed at that time very racist. All of this was accepted and part of the time and the society. Things have changed very dramatically since then.

I therefore found this play very tame. Whether or not it had been 'dumbed down' for this performance or whether that is they way it was written I don't know. Sadly I am not familiar with this play and it was the first time I had seen it performed. However, it did lack energy and tension. I was asked after the performance to give my immediate thoughts, and I described it as like watching 5 minutes-worth of 'Eastenders' extended into real time. In other words, for the majority of the play little or nothing happens, it is just about market traders going about their daily lives and the relationships and squabbles that happen amongst them. There are a handful only of moments where this mundaneness is broken, and tensions are higher. But the play doesn't really go anywhere or really have anything to say. It is billed as 'a coming-of-age' drama, and in this respect we see the protagonist fall in love and have his first sexual encounter with a fellow market-trader. 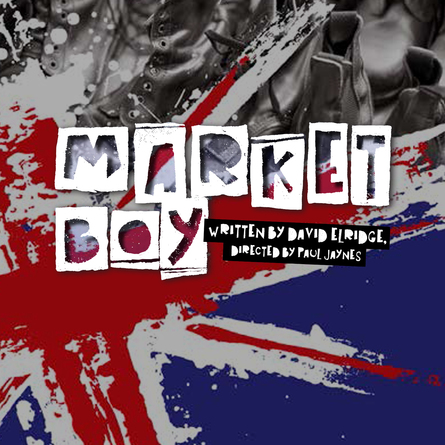 There is only one (or maybe 2) characters who do actually go on a journey and develop any during the course of the 5 and half years of the play; and whilst everyone else has gained that requisite number of years, they remain the same. The only thing to have changed them is the political, and therefore financial situation which only became evident and important in the denouement. However, The Boy (Alex Williams) does go through quite a metamorphosis as he takes his journey from shy, inhibited school-boy to running the stall, to realising that he needs to better himself and go to college.

In such a truly ensemble piece of theatre it is very difficult to try and comment on each actor / actress in turn, and with their being 25 of them, it would also take forever! I do believe that all the cast have invested a great deal into their roles and this performance and as such all need to be most highly commended. For me though, the most real and believable of all was the world-weary but very savvy keeper of the shoe stall the boy works for. Desperately searching the programme now for 'Shoe Man' or something similar in order to credit this actor properly, but sadly I cannot find it and there are no pictures to go with the names either. [Maybe someone will help me in this?] - Credit Paul Hector.

Sad to say though that after having seen what The Arden students really are capable of, this was a rather flat, un-atmospheric and uninspiring piece of theatre. The whole play lacked energy, truth and coherency; and at least half of the play could easily have been cut for the betterment of the whole.

None of this was helped though by the staging. The set design was six small flats representing the respective market stalls. Why not real stalls? These white flats with a B+W blown-up photo of the stall transferred onto them were flat and false too. The directing, by Paul Jaynes, did nothing to try and lift this either. The 'initiation ceremony' The Boy goes through was comical and we felt neither sympathy nor empathy for him, and his recovery was far too quick. The first fight in which the market owner 'kills' a fly-trader gets absolutely no reaction from the onlookers; and the final fight sequence which is overlong and performed in slow motion didn't fit stylistically with the rest of the play.

Hopefully I will be able to be more praiseworthy of and enthusiastic about your next production. This is an undeniably talented and very creative group of young actors-in-training, and I do know that they have the power to deliver given the right material and the right set of circumstances.