Barnum is one of the most complete musical theatre experiences I have ever had. There isn’t anything this show hasn’t got. From hilarious comedy which makes your sides ache from laughter to heart breaking moments which can’t fail to bring a tear to your eye.

The show starts before the curtain rises on the circus tent with cast members roaming throughout the auditorium performing circus tricks and inviting the audience to join in. Juggling, balancing acts and hula hoop tricks are just some of the spectacles presented.

PT Barnum was in his day one of, if not the most famous person in America. Tricking and conning innocent members of the public into paying money to see oddities such as a living mermaid and the world’s smallest man. The show charts Barnum’s life from the highest of highs to the lowest of lows and everything that came in-between.

Brian Conley in the role of Barnum couldn’t have been more perfectly cast. His wit and charm wins the audience over within the first sixty seconds he is on stage. Conley’s acting skills also shine bright in this piece with some tender moments played out with his wife Chairy, played by Linzi Hateley. Hateley again is perfectly cast and proves more than a match for Conley’s Barnum.

Another strength of this show is the supremely talent ensemble who all undertake numerous roles throughout the evening. Kimberley Blake as the Swedish Songbird Jenny Lind who mesmerises with her stunning voice as she catches the eye of Barnum, and Mikey Jay-Heath as General Tom Thumb provides a boisterous and energetic performance which culminates with Jumbo, the biggest elephant in the world.

No circus is complete without a band and here is no exception. Under the expert leadership from Ian Townsend they are faultless throughout and even play from the auditorium at one point.

With a myriad of circus tricks on show at times you just don’t know where to look as the stage is filled with the fantastic choreography of Andrew Wright, coupled with clever lighting.

The star of the show however is unquestionably Conley. It is clear he has worked incredibly hard to prepare for this role mastering the art of juggling, sleight of hand, fire eating and most impressively walking the tightrope. You could literally hear a pin drop in the auditorium as the first act come to its dramatic conclusion with Conley carefully inching across the high wire. Sadly he didn’t make it all the way across tonight, possibly due to a stiff breeze coming off the Quays outside the theatre.

It is virtually impossible not to leap to your feet at the curtain call to show your appreciation for the feast of colour and skill you have just witnessed. Sadly this is the penultimate week of the current UK tour which closes in Cardiff next week. If this production doesn’t transfer to the West End in the near future there is something very wrong with this world. 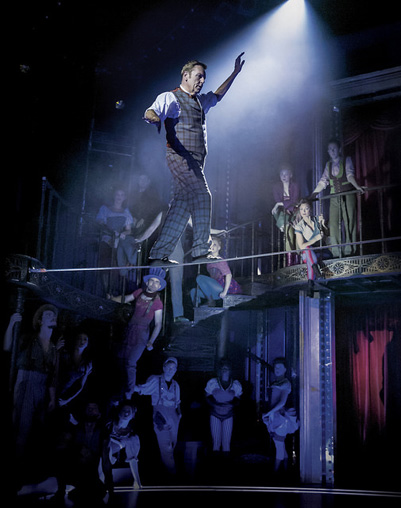