By Far the Greatest Team @ The Lowry

By Far the Greatest Team is a play in two halves featuring four mini plays and transforms the Quays Theatre at The Lowry into a football stadium. The four stories tell not just what it is like to be a football fan, but what it is to be a human being living in Manchester in 2015.

The first thing you notice as you enter the theatre, or should we say stadium is that 75% of the seats in the stalls have been removed and replaced by a football pitch. The stage has also gone and in its place a tunnel from which the actors later appear. There are advertisements strung up on the front of the theatre tiers and the whole setting designed by Lois Maskell evokes the atmosphere of a football stadium very effectively.

The four plays that make up the evening are ‘We’re Not Alone’ by Ian Kershaw, ‘Stretford End’ by Lindsay Williams, ‘The Good, the Bad and the Giggsy’ by Andrew Sheridan and ‘Only Football’ by Sarah McDonald. All four are superb in their own right littered with local references and football quotes much to the enjoyment of the knowledgeable audience.

The first play ‘We’re Not Alone’ penned by Ian Kershaw is probably the most shocking of the night opening with the Munich Air Disaster song sung by City fan Sam (David Judge) in an attempt to goad United fan Ryan (Andrew Sheridan). An intervention from Sal (Merriel Schofield) stops any sign of trouble as she reasons with Sam as to why he has a hatred of Manchester United. This is a powerful piece from the start and Judge shines with a breath-taking angry performance.

‘Stretford End’ by BAFTA nominated Lindsay Williams is a more upbeat and humour filled piece featuring estranged couple Robbie (Chris Jack) and Sal (Francesca Webb) and Robbie’s best mate Dunc (Mark Jordan). Robbie and Sal are still trying to settle their divorce and having shared the season ticket alternating going to home games Sal can’t help but turn up to the final United game of the season, and Sir Alex Fergusons final in charge of United. She even bought Robbie’s Grandmother with her! This cleverly written piece explores the couples past relationship and the effect football and ultimately Dunc has had on it.

Following ‘half time’ where pies were served to the invited VIP’s to further enforce the match day feel the comedy continued with ‘The Good the Bad and the Ugly’ by Andrew Sheridan. Featuring Sheridan as Albion, a United Fan who meets up with his ex Eileen (Samantha Siddall), a City fan who enters like a young Madge Harvey from Benidorm. Albion is searching for his dog who has escaped whom Eileen has found. This beautiful piece of writing is performed at a great pace with some of the best football put-downs of the night popping up during the slanging match between the pair.

The final piece of the night ‘Only Football’ by Sarah McDonald was for me the most heart-warming of the night as City fans Mark Jordan as Gary and McDonald as Abi explore their strained father/daughter relationship which was torn apart when she was just 8, only to be reunited as her brother has gone off to join the army leaving her father nobody to go to the match with.

Director Martin Gibbons along with Monkeywood Theatre have created a truly special piece of theatre which not only can be enjoyed by football fans, but by theatre fans as well. Like a football match, sadly this production ends all too soon on Saturday. I hope that it returns to this or a similar venue soon as it is really too good for such a brief moment in the floodlights. 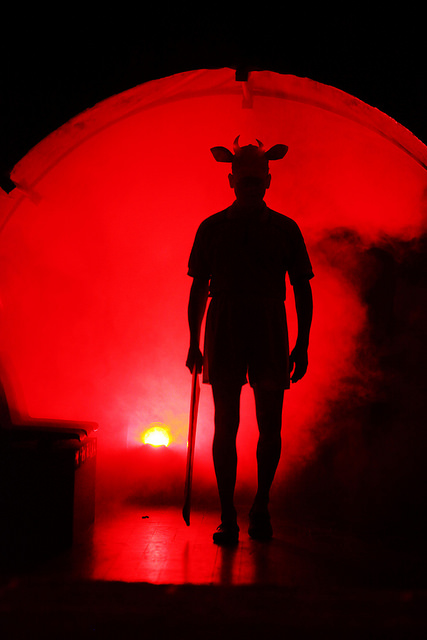