Presented by Theatre Of The Vivarium Studio - France.

To many, this 80 minute non-stop offering would be a masterclass in how not to do theatre. However, this is a company renowned for pushing the boundaries and challenging the acceptable. This is experimental theatre, and this particular production is experimental theatre at its best and most accessible. And where better than Manchester's HOME for the UK premier of this piece. A theatre newly founded dedicated to the new, the upcoming, the 'different'.

On entering the theatre we are confronted by an open stage. A car and a trailer take up most of the space, whilst around them are trees and snow. There are 4 people in the car, drinking beer, eating crisps and listening to music. They all have long hair and go through a variety of tunes, mostly Heavy Metal, but there are some surprises in the music too, even Classical. Even surprises in where the music is coming from. Although we know it should be coming from the car radio, it seems to emanate from the very pores of the theatre. This continues for what seems like an eternity. Nothing happens except us, the audience, watching them. On a simplistic level, then this is boring, uninteresting and has no place on a stage. However, this play challenges us on a much deeper level. It forces us to look at our own culture and our own perversities. We love to be voyeurs. We are a creature born for voyeurism. In fact we are encouraged by our society to be voyeuristic, from webcams, to Big Brother; from Facebook to those who just confess to like "people watching". And so here, we become the voyeurs, as we are transfixed by the mundanity of this scene.

In fact, the whole play can be seen as an allegory for this. Our lives have become so introvert and self-obsessed that we don't look around us and glory in the small wonders of nature and the elements... but instead look for the fantastic, the unnatural, the "dragons", as we always want bigger and better, and always want to put ourselves in the centre of this. However, La Mélancolie shows us, very clearly the ridiculousness of this, and forces us to see, in no small way, how selfish and egoistic mankind has become.

It is a style of theatre that not all will like. The actors don't raise their voices or even try to project in any way. They just speak naturally. They don't strut around the stage and "act". They simply walk, slowly and do things in real time. But as the play progresses and you are more and more drawn into their world, you realise that even the stage set, was exactly that - a stage set, made by them. The snow is not real, and is rolled up and placed again. The lights on stage are theirs, not the theatres, and as they use computers and projectors on the stage too, along with other electrical equipment we are shown the machinations of their effects, their stage.

A lady with a bicycle watches, and on the thinnest of plot contrivances, enters the scene. She represents us, mankind, the voyeur. The next hour or so is then spent showing her, her name is Isabelle, why these men are here and what their plans are, and how they plan to execute them. And with the wonderful catchphrase, "If you want we can show you" they explain that they are setting up an Amusement Park. But this is not an ordinary amusement park. In fact, Isabelle, (us) is already in the park and already being amused by it. It is a park which shows us the wonders of the everyday; water, air, fire, snow. They challenge our perceptions of modern art and literature too, but to say more would be to say too much, and I don't want to give any more away, I've said enough already, but the staggering and poignant imagery of the plastic dragons...[a reminder of our own mortality and insignificance?]... towards the end actually brought tears to my eyes. This play cleverly uses gentle humour and a naturalness of style seldom if ever seen in UK theatres. And what makes this even better, is that they are a French cast, speaking English with French accents, mispronouncing words, transliterating, or reverting on the odd occasion to the French. But this I found to be all part of the charm. I do wonder though if it would work equally as well spoken by native speakers, or indeed, how it would be if English speakers took the production to France and performed it in bad (sic) French.

This is an ensemble piece, and no character names are given (other than Isabelle, and only then by the rest of the cast. There is nothing to indicate this in the programme). But it would be impossible to single any of the cast out. Expertly directed by Philippe Quesne they worked perfectly together, and produced a piece of multi-media, boundary-breaking theatre of which they should be justly very proud. Bravo à vous tous et bis bis bis!!

The play runs until the 3rd October only, so get your tickets quickly!! http://homemcr.org/production/la-melancolie-des-dragons/ 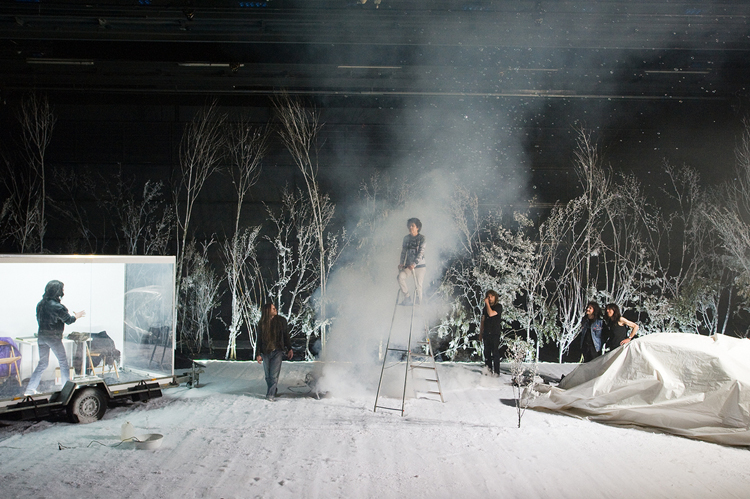