This student production of Spring Awakening is indeed an awakening of the mind, body and spirit on stage, in full rock and roll chorus.

Spring Awakening only became a musical in 2006, a full 100 years after its original debut. After skittering through underground stages and limited audiences, its award winning potential was finally realised when Duncan Sheik and Steven Sater respectively devised music and lyrics to reflect its characters’ confusion, frustration, anger, love, pain and heartbreak. It won 8 Tony Awards, including Best Musical, and, to my knowledge, it has not been censored since.

The members of Almost Famous, dramatic society at Salford University have obviously poured soul into their production of Spring Awakening. Tackling this is a challenge, and presenting it well, in a way that conveys the cocktail of emotions, the historical context, religious ideologies, political nuances, and is respectful, is an even taller order.  But, under the sensitive and insightful direction of Anna Hickling and Leah Crepaz, all involved here should be proud and enthused at their success in bringing it truly to life. 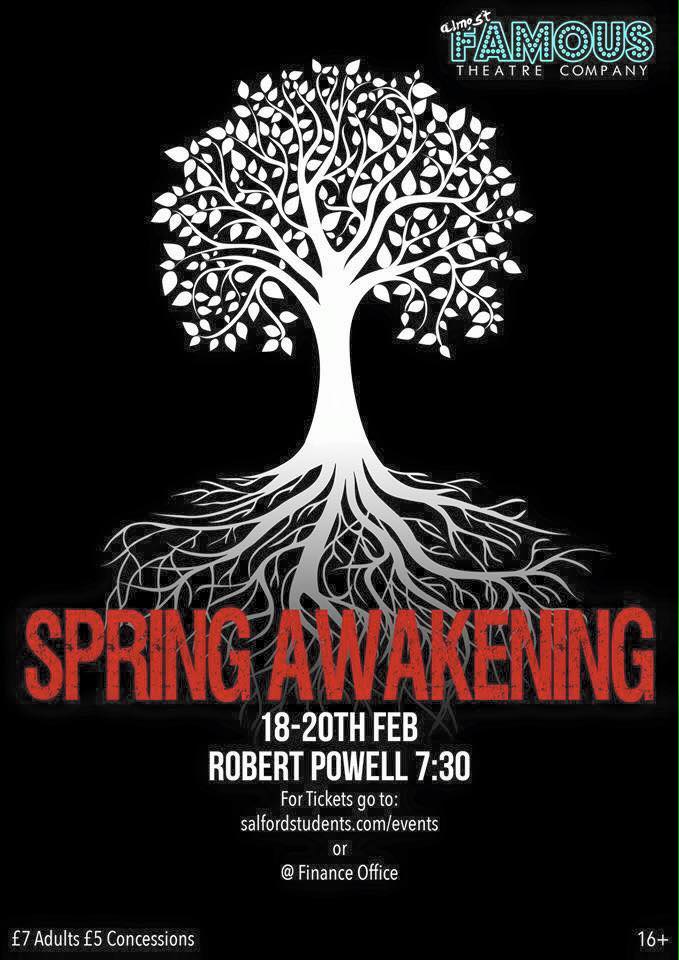 Performances which stood out were those of the two leads, Jordan Sim as the headstrong thinker-beyond-his-time Melchior Gabor, and Adey Lawton as the naïve and hopeful Wendla Bergmann. Both are lucky enough to posses singing abilities that will no doubt go far in the musical theatre industry and are believable and focused in their performances. Sim is enthralling to watch; each new rock and roll number he delivers rouses all the spirit and rebellion of adolescence, and the audience loves it.

James Blake as troubled Moritz Stiefel portrays a boy on the edge, and does it with feeling and a clear descent from confusion to depression. His character’s story is a hard one to watch; all his life he has been taught little to nothing about growing up, or all the emotional ‘junk’ that comes with it, and can’t ask for advice or help except in secrecy from a close friend. He’s been singled out by his teachers as someone who just can’t make the cut, less their society would suffer for his example. Genuine sympathy is felt by the audience watching Blake’s performance grow.

Almost Famous keep as much as possible to the classic staging of Spring Awakening. Opening with the ethereal vision of Adey, illuminated in her white kindergarten dress, on a kind of pedestal, the image is one of innocence and angels. At this moment, if you have any idea of what is to come, you’ll know how appropriate and poignant this beginning is.

Another unforgettable scene, though for entirely different reasons: Duncan Boyes as Hanschen Rilow in lonely fits of passion, reading apparently raunchy Shakespeare under the covers. This, alongside Sam Morris’s Georg Zirschnitz on the edge of his seat in agony at having to be eye-to-chest with his piano teacher, is a recipe for hilarity, and, perhaps many readers would admit, resurfacing memories.

Choreography, here worked on by Josh Perry and Charlotte Mani Fold, is on point. There can be a danger sometimes, when a large cast tries to fit all together on a relatively small stage, that the whole piece might become messy, but these two have managed to combat this with beat for beat precision and dynamically thought out choreography.

Likewise, vocal coaches Ruth Lockwood and Jordan Sim (that’s right: a lead starring role and hard at work behind the scenes!) must be praised. I have not seen the cast progress from audition to curtain up, but last night’s performance demonstrated many hours of hard work and, besides the odd bum note perhaps down to nerves, the cast sounded marvellous! Perhaps the technical sound mixing could or timing could have been more precise, but this didn’t impact the quality of the performance.

The entire cast display very trusting relationships to deal as a group with the issues in this play: everything from puberty, sexuality, rape, child abuse, homosexuality, suicide and abortion is covered. Although striking, and maybe not one for your little ones, it conveys an important message and by the end, we feel as if we’ve learned a lot and examined ourselves as we have not done in a long while.