I was looking forward to this show very much for a number of reasons. Ricky Tomlinson and Stan Boardman are stalwarts of the Liverpool comedy scene so hilarity was surely guaranteed. The courtrooms of St George's Hall have always struck me as amazing performance spaces so hosting a trial with two of Liverpool’s most well known comedians can only be good right?

The first surprise of the evening came when we discovered that Tomlinson wouldn't be performing in any of the shows during this run as he was filming instead and that the role of Ricky Tomlinson would be covered by Michael Starke. This didn't concern me as I have seen Starke perform a number of times and he is not only a great actor but a great comedian in his own right. I did wondered why though Tomlinson was still featured when he wouldn't be performing, why wasn't it Starke vs Boardman instead? This question was answered when Case Number 45 began.

The show started with cases 39-44 being resolved before the featured case. This didn't add anything if I am honest and began to highlight early what would become a major issue with the show - the sound. The acoustics throughout the hall are very poor and the courtroom was no different. None of the actors had radio mics and they relied on 3 desk mics and projection which proved to be massively ineffective.

When the feature “trial” started the holes really did begin to appear. Boardman could not be heard at all from my seats at the back of the room and as the actors moved away from the desk microphones chunks of dialogue were lost. I would struggle to tell you much at all about the story because I just couldn't hear it. I did however discover why it was still billed as Tomlinson and Boardman - Starke delivered his performance impersonating Tomlinson. I actually feel that this has done his own talents a massive disservice and it may have been a much stronger show if Starke had played himself instead of Tomlinson. 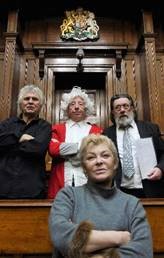 There were a lot of the actors/performers who had scripts with them and at times they were reading directly from them. At the end of the performance, Boardman explained that Starke had only one week’s preparation time, but what excuses did the other actors have? It felt very underprepared and had much more of a rehearsal room feel to it, like it was waiting for someone to take control, than a show that cost £20 per person for a 1 hour performance.

There were some great one liners and it wasn't all bad but I expected and hoped for much, much more. By the end, it had descended into chaos with cues being missed, lines being lost and at one point two pages of dialogue being skipped over (as the audience were informed by the Court Clerk). The audience were up and laughing at the end but sadly it felt like they were laughing at it rather than with it. It wasn't all the fault of the people on stage and that may be the real tragedy of this show. When you have worked for over a month putting together a show, rehearsing it, building chemistry between the actors and then one of the leads gets a better offer (as implied by Boardman at the end of the show) and leaves with only a week’s notice, it is never going to be the best version it could be.

Other issues were that there was no allocated seating so there was a lot of handbags keeping seats warm and people spreading out leaving many stood at the back until finally St George's Hall staff had to bring in extra seating and ask people to move up.

Overall, I was desperately disappointed. There is so much potential with the show, some bits when I thought it was getting there and the concept could grow and develop. I wanted it to be great. It deserves to be great. But it wasn't and I'm saddened by that fact. Maybe some of the issues could be ironed out in future performances but this one fell a long way short of where it should have been.