The Merry Wives - The Lowry, Salford

The clue is in the title, but the title is misleading.... This is a play by William Shakespeare, and the title of Shakespeare's play is, 'The Merry Wives Of Windsor', and despite the rationale for shortening the title for this production as laid out in the programme, I would question the need and value of so doing. The title is a famous one and people know it; people recognise it as Shakespeare, and with any other playwright it would more than probably be under copyright and not be possible to change. Therefore, by so doing, one's immediate reaction to this shortened title is that the production will be either, a) a parody of Shakespeare's play, or b) a play based upon Shakespeare's themes and characters. This was neither. It was the play! [Admittedly certain licence was taken with place names and local dialect adlibs]

In a collaboration between Northern Broadsides and The New Vic Theatre, this is Northern Broadsides' Artistic Director Barrie Rutter's third Falstaff creation, as he bravely both directs and plays the ageing and hard-up philanderer.

If you like your tea very weak with plenty of sugar, then you'll enjoy this interpretation of The Merry Wives. The directing is light, fast flowing, and played for laughs. This is after all one of Shakespeare's most farcical and light-hearted plays, and so with plenty of bonhomie and joie-de-vivre this production relies very much on caricature rather than character, and visual rather than verbal. For one, I feel that directing a play and acting in it is, if not always, then certainly many a time, a mistake. Especially when the part being played is a leading role. What Rutter would have benefited from was some direction himself, and some of the groupings and moves seems distinctly stagey. Although I did enjoy the final song and dance. The text, again despite the excellent programme notes, was missing depth and variety with many of the sexual innuendos and bawdy schoolboy humour found all over Shakespeare's texts seemingly, for me at least, if not glossed over, underplayed certainly. 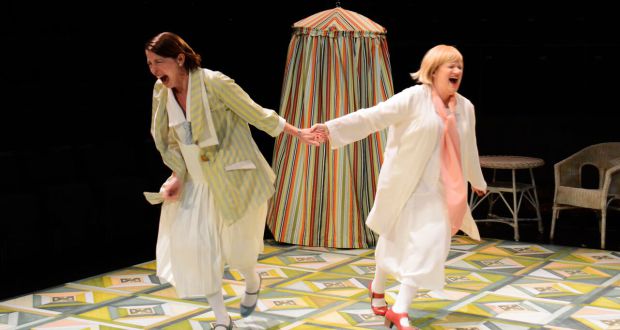 The set, costumes, and all the sports equipment used were all of the period between the two World Wars, except the walking machine which looked perhaps a little too modern for that era. The set included 6 wooden 'trees' which added nothing to the performance and looked rather odd. I would have preferred to have seen six smaller topiaried trees which could have been both inside and outside plants if indeed the trees were at all necessary. The stage floor was too small for the Lowry stage and so the patio design simply stopped which again looked odd.

I did like the costumes very much, and appreciated the use of all the sports equipment as weapons. This worked very well indeed.

The acting, by and large, was very good, although most were erring very much on the side of caricatures rather than characters. This was especially so with a rather border-line racially offensive portrayal of the most Italian Frenchman I have ever seen, Dr. Caius, as played by Andy Cryer. Another near-the-knuckle performance came from a stereotypical and openly gay Slender, Jos Vantyler.

Both leading ladies, the architects of the mayhem and bringers down of Falstaff, were very good, especially Mistress Ford played by Becky Hindley. Her husband, Frank Ford, played by Andrew Vincent, started very well indeed, being truthful and plain in both his feelings and character, but soon let this drop as he ran about the house looking for Falstaff in an almost Inspector Clouseau-ian manner.

If this had been opening night then I could easily have thought that the play had not as yet had time to bed-in so to speak, but I see that your stint at The Lowry is the third venue so far in your tour, and so things should have been more solid. I found the whole evening very inconsequential, the deeper meanings of the text ignored. This is certainly something that will entertain and keep you laughing as you go to sleep, but you will have forgotten it all by morning.