The opening to Criminals! was strong and intriguing – a female character who is somehow mixed up in some financial wrongdoing, an errant partner who won’t return her calls or collect his stuff, a setting of Christmas (always a poignant time of the year) and then the decision to hang herself with the Christmas tree lights.

Then the lights blow, a crash reverberates the stage and a masked man emerges from the darkness pointing a gun at the audience. I squirmed uncomfortably, I’ve learned I don’t like having a gun pointed at me.

The scene then unfolds with the background to the burglar’s break-in. Chuck (Armen Georgian) a bungling immigrant, holds Victoria (Louise Denyer) an uptight ramrod, responsible for his current bleak situation. She’s the boss of the bank who won’t give Chuck the loan he so desperately needs to renovate his burned down blini restaurant. 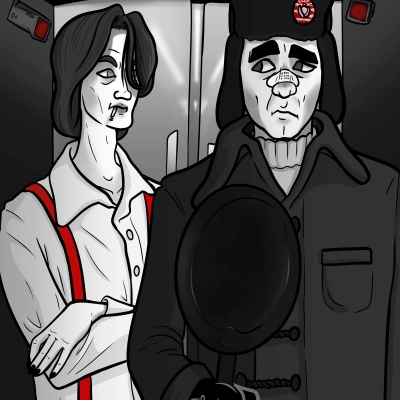 The insurance company won’t pay out, his wife and children have moved back with her in-laws and he’d read in the papers Victoria was a criminal (financial misconduct/ fraud stuff) and thus he devised he would break into her house and get the cash from her instead to rebuild his life.

However, we then learn she’s been sacked by the bank, set-up by her former husband (who was also her boss and director of the bank), gone off with her best friend and been accused of a fraud she didn’t commit. When Chuck suggests they break into her partner’s home and steal the money from him, it seems a pretty natural course of events – she’s been cast a criminal anyway, so what the heck?

The next chain of events were pretty standard fare and a bit too “nicey-nicey” for my liking. A year later Chuck arrives back on the scene, having done the right thing, and the acts wraps up with a sickeningly-sweet happy ever after. But perhaps that’s my pessimism. It felt like this play was going to be more challenging, or comedic, about the financial wrongdoings of our time and, for me in that aspect, it fell flat. It was also rather laborious at points and while the storyline is clear, it’s a little too classic for a fringe production.

I found the character of Victoria took the whining victim mentality a little too far, however, Armen Georgian, shows tantalising potential – and is one to watch in future productions. Chuck, as a character, was a little 2D to really test Georgian’s skills, but even within the tight parameters he still showed a versatility and presence on stage which will make this actor’s career an interesting one to follow.