Hoping our seats were somewhere near the back where two adults without kids might be less conspicuous to see this show which is surely for youngsters?  we were pleasantly surprised to see that we were not out of place at all. (and our seats were in the front stalls!) I believe that for every child there were at least two adults with parents, grandparents, aunts, uncles and friends being willing to 'tag' along to the show. And what a show!!!

We were treated to 2 hours of good old fashioned slapstick comedy from father and sons team Clive Webb, Danny Adams and Mick Potts as the bumbling village idiot, a trio of glamorous dancers, the Cirque Du Hilarious Showgirls, the Rock band Clownforce with singer Wayne and a tumbling artiste who all added to the mayhem on stage.

Most of the show focuses on Danny Adams who is super charged with his energy exploding onto the stage, he is zany, slightly naughty with the innuendos to keep the adults happy, but judging by the laughter from the children not much is missed by them! Kids (of all ages) love toilet humour and the 'smart fella' sketch had them in stitches when he became... well I'm sure you can imagine! 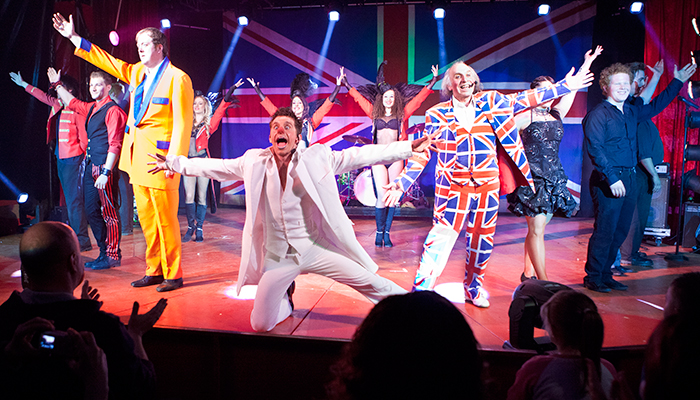 Everything is all good fun and the pace never drops. It's all the comedy you see in a circus but without the scary clown makeup (so many seem to have a dislike of clowns today so there is nothing to fear in this show.) His father Clive Webb has little success in keeping Danny in check but hidden within the mayhem is real magic amongst the cream pies and water cannons! Yes, we got wet!

Audience participation is part of the show and there are some hilarious moments with props going wrong...intentional or not, who cares?, it just added to the laughter.

Its unsurprising to read that Clive Webb had a career spanning seven years with Roberts Circus but what is surprising he was a drummer with them before he became the head clown and tonight we are treated to some of his great drumming skills. Both he and Adams have had successful television appearances including Crackerjack, The Sooty Show, Mole in the Hole and The Tweenies amongst many others.

The show is aptly titled 'Cirque Du Hilarious' and as its exactly what you get, it's easy to see why they were awarded the Ken Dodd Comedy Award and the CFA Best Comedy Act. There are so many laugh a minute moments and that much crammed into the show, I wouldn't want to highlight one particular spot above another. Suffice to say your sides will ache from all the laughing.

Cirque Du Hilarious is family entertainment at its silliest, it's fast paced, it's pure enjoyment for all ages and it's something you should get along to if you love a good old fashioned show, with light hearted comedy guaranteed to raise a smile and at the same time bring tears to your eyes with laughter.