Sunday afternoon isn't the best time for comedy, but The Quays Theatre at the Lowry is suitably full. It's a star studded show... Well, the set is anyway: a host of twinkling lights against a black backdrop. Hal bounds out to very respectable applause and is immediately likeable, engaging and very funny. His show is called Tough Luvvie and he explains that this expression pretty much describes him; a classically trained actor, turned TV bit actor, turned comedian; in this later incarnation I think Hal Cruttenden has found his true calling.

There's a running theme throughout the show - and indeed Hal’s career - about him being mistaken for a gay man, despite his wife and children. His delivery is camp, theatrical, flamboyant and persistently hilarious. His wife, he tells us, is from Northern Ireland and is, apparently, very lovely... And terrifying. He does several riotously funny and evocative impressions of her, as she warns their children - in a turnaround to the old classic - to "wait till your father's not home" when they misbehave. And yes, she does sound terrifying.

In his act Hal takes a theatrical swipe at various politics, policies and politicians, including Vladimir Putin (who apparently he thinks looks like a gay icon), football and footballers, and the Jeremy Kyle show, but the best bits are when he's talking about himself and his own life and experiences. He's a self-proclaimed posh, middle class leftie, a "leftie bigot"; he's angry but he's not sure why. He has a mischievous pop at the local area and the city of Salford, a bit of a risk when you're outnumbered, on your own and far from home, but it's all taken in good humour. And he cheekily discusses the north/south divide... and how ideally they should build a wall, because he's middle class and from Enfield, which is somewhere on the dark side of that proposed wall.

His performance is theatrically camp and his every sentence elicits a solid laugh. This northern Lowry audience love it and are lapping him up. He's very self-deprecating; he makes fun of himself more than he makes fun of anyone else. But his likable nature means he can pretty much say anything about anyone and they would laugh and not take offence.

I haven't seen Hal Cruttenden before, but I will definitely be in the audience next time he crosses the wall and braves it up north. 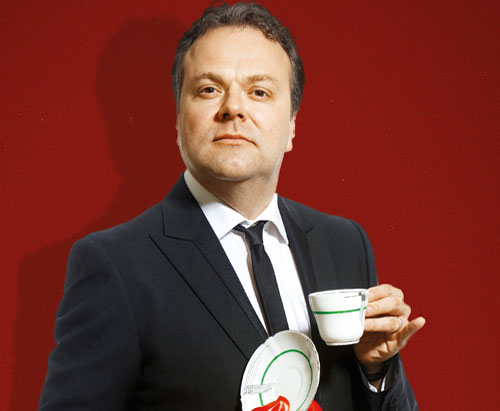