Justin Moorhouse. I’m familiar with the name, of course, a comedian who's appeared on the usual TV comedy panel shows, 8 Out of 10 Cats and so on, but I can’t place his face. A quick Google search can't hurt… Turns out he's from Manchester, so at the Lowry he’s performing on home ground. Google tells me he was a DJ on Manchester's Key 103 and found fame through the comedy night at the famous Frog and Bucket. (Famous in Manchester anyway.) So he's local.... In fact he's currently compering the monthly comedy night in Heaton Moor, so we're virtually neighbours. He’s a vegetarian, is left handed and has his own teeth. Some of those things I don’t need to know for the review, but he sounds interesting.

The stage set in the Quays Theatre is good; better than you’d expect for stand-up, which is often nothing at all: we have plush red curtains, metal packing cases, old fashioned studio lights… it’s very atmospheric and surprisingly showbiz. Justin bounces out, no pun intended; he has a go at his own weight (he’s slightly on the larger side) and his dress sense (he’s wearing turned up trousers and a tank top, so, by his own admission, he looks like an oversized toddler). He has a cheeky way about him, he’s fun and funny; it’s impossible not to like him and to laugh along with him.

He’s forty-five, he tells us, and has recently had a hip replacement. Some of the staff from Stockport’s Stepping Hill Hospital who operated on him and nursed him have been invited and look down from the upper tier. He praises the NHS but has a dig at dispensing pharmacists for being slow and power crazed.

Justin interacts with the audience a lot, a bit of banter and some very funny one-liners, getting a very good reaction. Most of his act seems to be based around his own life, mainly domestic (married with two children – thanks again Google) and observations of the things around him. He’s an immensely likeable man, a natural performer and a great character. Everyone in the Quays Theatre seems to be really enjoying the show.

My only slight criticism is that some of the material could have been tighter, especially in the second half; I felt it would have benefitted from being edited down in some places. This was particularly evident in the last long story. I don’t want to spoil the plot (Nope, that’s not a typo) but when driving to London and in need of the toilet, Justin drove past Knutsford services, he ignored Sandbach services and eventually there were inevitable unpleasant consequences, which form the basis for this last protracted story. Not to everyone’s taste.

At the very end, after rapturous applause, Justin goes off only to return to the stage wearing Speedos, which have featured in one of his anecdotes. When he turns round they’re like a thong and there’s a lot of nakedness on display. He’s a brave man. So that’s Justin Moorhouse; I now have a face to go with the name. Unfortunately, next time I think of him it won’t be his face I remember. 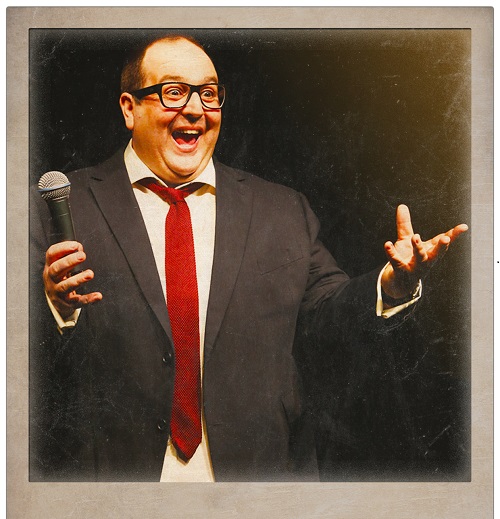