The Boy With Tape On His Face - Carriageworks Theatre, Leeds

Tonight I had the opportunity to see a show unlike anything else I have seen before. I had seen clips of TAPE FACE’s work before on The Royal Variety Performance, and I thought to myself back then…what a simple, yet clever idea for contemporary mime. However, reflecting on last night’s performance I don’t know if you can simply categorise this artist’s work into the ‘mime’ genre, he made me laugh more than any stand-up comedian ever has, and as far as I can remember I have never seen a comedian receive a complete standing ovation from an audience before. So, how does he do it? How does a man, with a silly hair style, black tape across his face and a lot of eye liner entertain us for 110 minutes without talking and delivering punchlines without a word spoken?

TAPE FACE was hailed on the most recent season of Americas Got Talent as a genius, a large and complimentary statement for any performance artist. This gave me huge expectations for the performance last night at the Carriageworks Theatre, Leeds. I do have to say, when the performance first started and I witnessed a re-vamp of the duelling banjo’s routine with two squeaky pigs, I did think to myself…really, genius? But, as the show continued I soon realised the genius nature of TAPE FACE’s work is not the complexity or ‘maturity’ of his material, but the simple understanding of how human’s react to and enjoy silliness and will gladly revel in any opportunity to use our imagination. 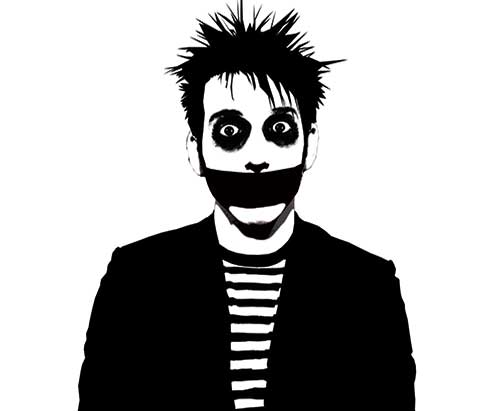 There is no denying that TAPE FACE’s performance relies heavily on the participation from the audience, and some of these moments were the highlights of the evening. This is such a hard show to review and analyse as it was so enjoyable, and this is purely down to the element of surprise, and TAPE FACE always taking the joke one step further than you initially suspected. Therefore I shan’t give too much away about how the audience were used within the act, yet simply acknowledge the wedding, the western shoot out and the feather dusters' love scene as the stand out moments of the evening. Initially you are praying that TAPE FACE doesn’t point at you to be a volunteer as you have no idea what may be in store for you on that stage, but by the end of the show I was almost hoping to be chosen as it looked so much fun to be involved in this hilarious act of chaos. By the end of the performance I finally got my wish, and so did every other member of the audience as we were all relied upon to deliver the punchline of a very long awaited joke. I can safely say that in this moment, every member of the audience was on their feet laughing and smiling as they got their chance to contribute to this amazing spectacle witnessed on stage.

TAPE FACE has clearly worked strenuously to perfect this piece of theatre, with every lighting and sound cue on point to assist in delivering the punch line (without words). And although I may have seen some of his material before on various guest performances, I think it is that predictability and simple nature of his work that has made TAPE FACE the success that he is, after all every audience member likes to think they are one step ahead of the game, even if they aren’t in this case.

After the performance I found myself in a dilemma how to review such an interesting and unique piece of theatre. It would be very difficult to review a magician for example without ruining all of his tricks and surprises, and the same applies in this sense to TAPE FACE. I would have no doubt of describing this man as a magician after what I witnessed in the CarriageWorks Theatre last night. This man made me cry from laughing on more than one occasion and made my cheeks ache from smiling, and he did this by simply holding up a feather duster and a cagoule, that is magic.