Nina Conti - In Your Face @ The Lowry

Nina Conti is probably one of the bravest women I have seen on a stage for a long time. Inviting compete strangers onto stage with her, putting a mask on them and making them talk is all well and good, she just has no idea how these subjects will react. And this is what her fans love about her as demonstrated by a capacity audience tonight at the Lowry.

Returning to Salford a year after her last sell out gig, this is a completely different show to last year. Relying on this visit on her trusty companion Monkey as her only true puppet on stage with her and the numbers being made up by “willing” volunteers!

As Monkey emerges from the safety of a handbag he immediately begins talking to the audience establishing who they are here with, what they do and relationships they are in. This is the first example of Conti’s quick wit and ability to adjust to any situation without hesitation. Knowing just how far to push boundaries, this of course is all an evidence gathering session for what is to come later in the show.

The stars of this show are the audience. A Doctor and a Police Officer are the “volunteers” during the first act both entering into the spirit of the occasion and playing along to the words Conti puts into their mouths. It truly is amazing what she can get people to do on stage much to the enjoyment of the audience and of course their family and friends.

An exceptionally clever joke is set up and executed to perfection to close the first half and indeed continues into the second.

The second half sees Conti banished into a bag in order for Monkey to have some time alone with the audience. Whilst this was a clever section it did seem to drag a little, however watching audience members wave at Monkey during this proved just how convincing a scenario it was.

Back to the “volunteers” we saw a lawyer and a financial advisor perform a ballet and a boyfriend suggest to his other half how he could get a villa! Each scenario was superbly handled by Conti despite not quite knowing what was coming next reacting to the movement and hand gestures of her subjects.

For the final section Conti turned herself into a puppet. That really has to be seen to be believed, I will say no more than that.

At the opening of the show we are told that the evenings’ entertainment was completely made up on the spot and that each performance she has given so far on this tour had been different. Conti’s ability to react to situations in a split second on stage are what sets her aside from other acts. The jokes she makes at other peoples expense are at times so spontaneous she herself is in fits of laughter along with the audience.

If you have never seen Nina Conti live before, do it! I for one will be scouring the listings in order not to miss her next visit to the Lowry. Pure comedy gold! 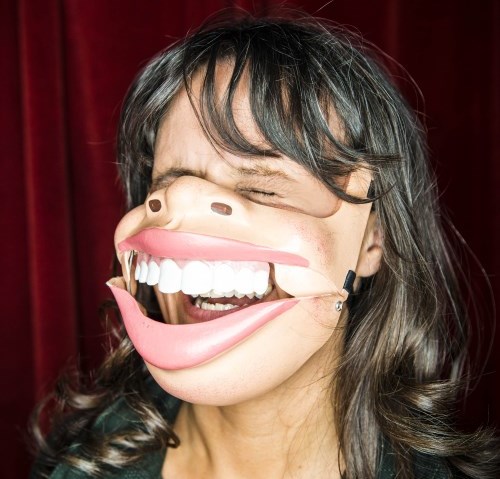