QI Presents: No Such Thing As A Fish - Lowry

I begin this review with a confession for which I hope after you’ve read it you will forgive me. When I signed up to review this show, I knew very little about QI, the popular TV programme from which it is derived. A few days ago my 12 year old son, who has just started watching repeats of it on Dave, informed me condescendingly that QI stands for Quite Interesting. I don’t know why but I’d always assumed because it’s Chaired by Stephen Fry, that QI is some kind of pseudo University Challenge panel show, heavily skewed towards Science, fronted by Oxbridge intellectual types and some comedians.

Having seen this entertaining show, which takes the form of a live podcast, I readily admit that I was wrong about my first impressions of QI and now publically hang my head in shame. Thanks to the engaging performers of this show, (who also happen to be the researchers and writers of QI), I now know exactly what the show is about and will happily admit to becoming an instant covert to the whole QI phenomenon.

When the show recently played at the Edinburgh Fringe Festival it was described by one critic as, “The geeks inherit the Fringe.” This tagline is a bit unkind but it does however perfectly capture the essence of this mad cap, zany show. Since 2014, the QI writers, Dan Schreiber, James Harkin, Andrew Hunter Murray and Anna Ptaszynski, commonly known as the QI elves, have produced a weekly podcast that now has over 600,000 subscribers, approximately 12 times the capacity of Old Trafford, (a QI fact if ever there was one). In the weekly podcasts as in this live stage show, the elves present each other with the most interesting fact they’ve recently learned for the others to deliberate, discuss and mull over. In this show we were treated to such gems as there is a ski shop in the middle of the Sahara and that the actor Brian Blessed as well as being able to pee over an eight feet wall also once punched a polar bear on the nose.

Now I’ve been educated in all things QI, I hope that I’ll be forgiven for my earlier faux pas. If you don’t get to see the elves on their current tour, (the Lowry was the first date), make sure you listen to their podcasts, including the one of this show. From now on I’ll be tuning in religiously every week. 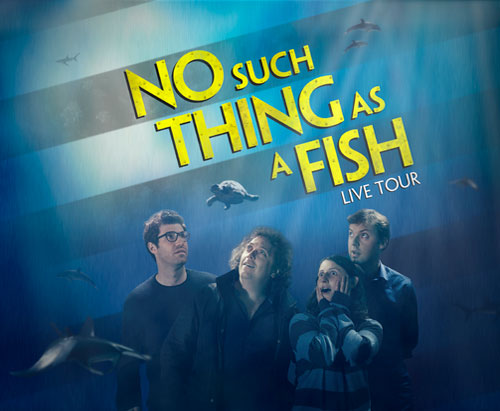