Milton Jones is Out There - The Lowry, Salford

If you’ve watched any TV panel show in the past few years, you will have almost certainly come across Milton Jones - the indisputable king of the one-liner. He is hilariously quick-witted when it comes to Mock the Week, but I was interested in how exactly this would translate to a full scale stand up show.

Before the show even began, Milton had the audience roaring. The pre-show music included such gems as Sweet Caroline and Aqua’s hit Dr Jones, but of course, in both cases, the words Caroline, and Dr Jones were changed to “Milton Jones” said by the man himself, in a bit that just got funnier the more it happened.

The very first performer of the night was the United Kingdom. Yes, Milton came onto the stage wearing a giant cut out of the UK and discussed Brexit and various other things affecting the country at the moment. There is something about him that means even when he is making politics points, he is just so incredibly inoffensive and lovable. I’ll be honest, this bit was pretty weird, and some technical issues with the lights meant that some jokes didn’t work out as they might have done, but it was still very funny and an interesting way to see a different side to Jones. 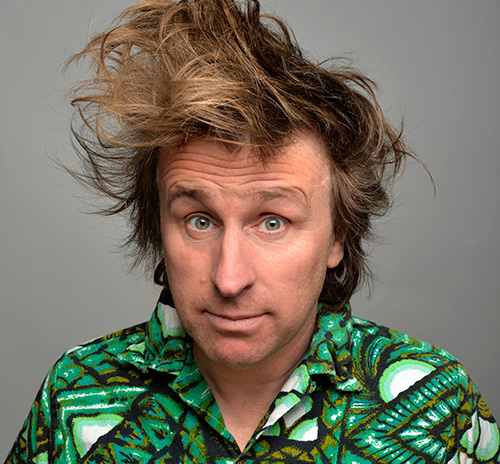 Before the interval, we were treated to support from Chris Stokes. Chris’ brand of comedy perfectly compliments Milton’s in that it was hilarious and unassuming. Stokes is quick to interact with the audience, and seems as though he is really enjoying himself on stage, which is something contagious. He tells stories of his divorce, getting a dog and moving back in with his parents and by the end of his set, he has a lot of the audience rooting for him. A genuinely likeable comedian.

After the interval, it’s time for the main man to take the stage. Milton is a lot more fluid than he is on panel shows, presumably because he has written the whole set, rather than having to quip one-liners between other comedians. He utilised several props on the stage, including a bird house, which has an old-school rotary phone inside, and a stool which has a note inside, is used as a bridge and a gardening stool.

The concept of the show, (although I use that loosely) is that his PR agent Becky, who we hear from via voice over a few times, is trying to get him “out there”. Milton talks about different subjects such as his garden, and his family, as if being interviewed for various publications.

I’ll be honest, this concept is a little vague and at times it felt a little clunky going from one thing to another. Milton doesn’t tell lengthy anecdotes and so I guess this is as good a vehicle as any to travel between different concepts, however occasionally it feels a little forced.

That said, his jokes were incredible. Milton shoots puns out like a polite machine gun, although some are slow burners and it’s a thing of beauty to see a joke making its way across the audience as the penny drops.

Milton pulls out a recycling bin full of flags at one point and performs a short play with the British flag interacting with various other flags - complete with accents. Only Milton Jones could discuss politics in such an adorable, heart-warming way. He is one of a kind.

I was worried that he wouldn’t be as good on stage as he is on TV. That perhaps his performed awkwardness would not translate well to the stage or run a little thin, but actually, Milton is even better on stage. I would go and see this exact show again because it is genuinely that funny (and chances are there will be jokes we all missed the first time around).