The Secret Garden - Theatre By The Lake, Keswick

The classic children’s novel The Secret Garden gets a modern, dark makeover by Jessica Swale for Keswick’s Theatre by the Lake’s stunning Christmas production.

The modern set centres around a cube that could be a feature in Grand Designs, and is equally dramatic and versatile as a contemporary high end designer home. The two-story box opens to provide glimpses into the lives and backstories of the characters in this moving story of Empire, class, loss and compassion.

The stage is set from the moment you walk into the theatre itself, walking through an archway of shrubbery – and as you enter the main theatre cast members are already at work setting their scene.

The opening scenes set in India has subjects and actions which are difficult to watch, yet beautifully portrayed by Frances Marshall as a cold, ‘gin-soaked’ upper class mother, Natasha Cottriall as the unloved child and main character of the story, Mary Lennox and maid Ayah played by Rina Mahoney. 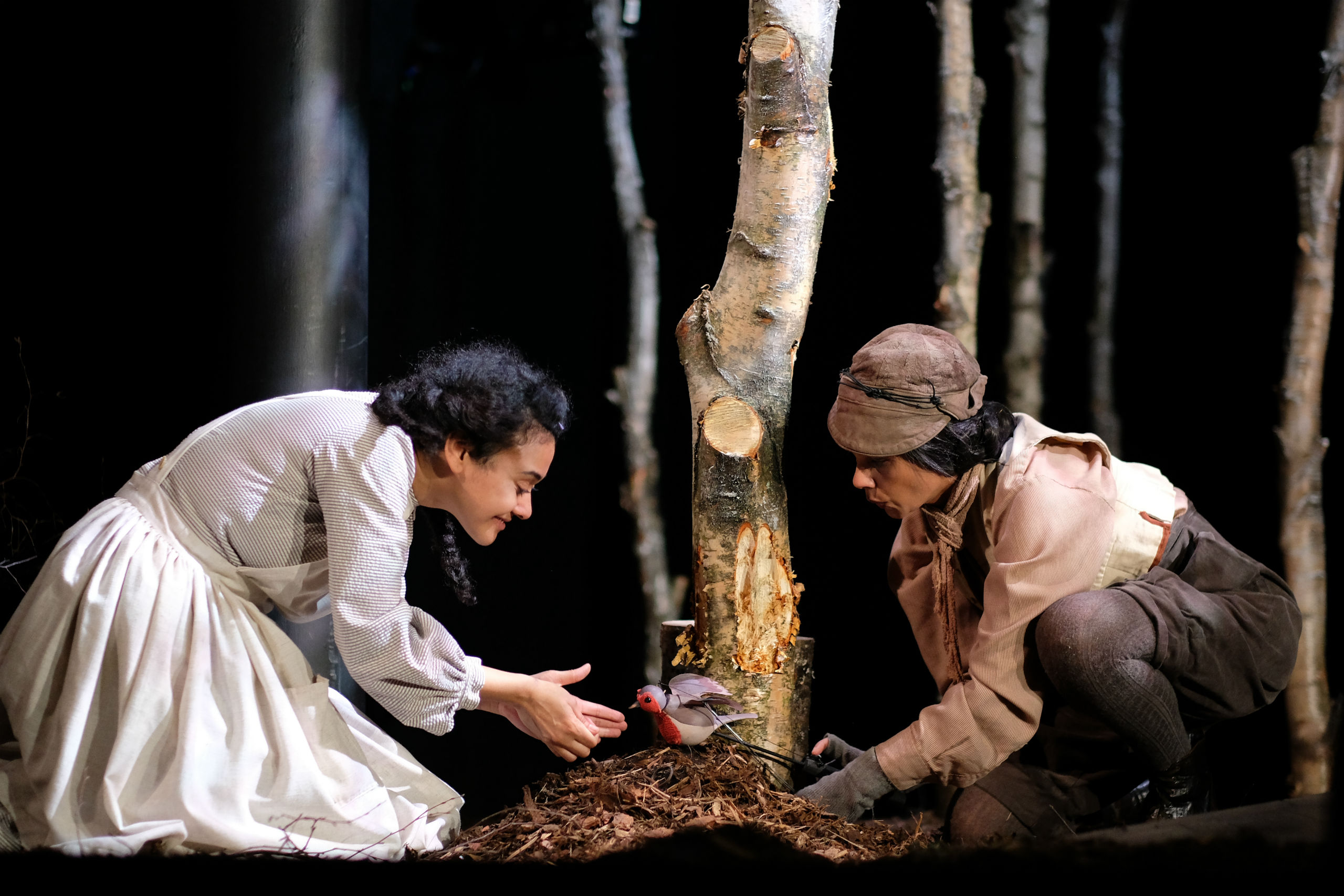 From India to the wild moorland of Yorkshire and across Europe to Switzerland, we are taken on a journey of individual self-discovery. Self-belief is the mystical potion that brings about change within a natural environment – and the wild animals of the moors play an amazing part in this truly magical production. This is excellent puppetry which will capture your heart and imagination.

Chris Jack as Archibald Craven, the heart-broken husband and father of the bedbound Colin Craven gives a commanding and dramatic performance.

Olivia Sweeney as Martha the young Yorkshire maid brings warmth and charm to the production.

I particularly enjoyed the performance of Russell Richardson as the kind gardener Ben Weatherstaff – a warm character reminiscent of Compo from Last of the Summer Wine. And Flo Wilson as housekeeper Mrs Medlock give a great performance, and excellent Yorkshire accent.

The staging of this production provides surprises and drama at every scene change, and as the secret garden begins to grow and expand its re-birth, touching the lives of all around, the darkness of the set gradually lightens to a bright beacon of hope and joy. Artistic Director Conrad Lynch and director Liz Stevenson have brought something special and unique to Theatre by the Lake for the festive season.

The first half of the production must fit in a lot of background setting, and introduction to the players. However, the second half moves more at a pace to keep the audience enthralled.

The dancing scenes were particularly well choreographed, and singing enchanting. This cast works well together.

Young people who love the sadness and reality of a Jacqueline Wilson novel will love this production – though it is dark and a little scary for the very young. However, children often enjoy being a little frightened and the journey takes us to a happy and hopeful ending.

The Secret Garden has woodland animals, a baddie, and orphan, magic, song and dance yet it is no pantomime – it is something much more special and memorable. This is a Christmas production that has something for young and old to be shocked, enchanted and entertained by.

This adaptation of The Secret Garden makes the themes of the early 20th century story relevant to young people today – believe in yourself, and never let other’s hold you back from your dreams.

The Secret Garden at Theatre by the Lake runs until 13th January 2018. https://www.theatrebythelake.com/production/15828