One of the delights of the ever expanding Greater Manchester Fringe festival is that you experience a variety of theatre that you may not normally get to see; it aims to take you outside your comfort zone. With that in mind, I ventured to the small, but perfectly formed, Whitefield Garrick Theatre (maximum occupancy 85 if you all breath in), for a Thespis Theatre Troupe interpretation of some of the most beautiful poetry in the English language.

Hailing from Israel, the company, led by the charming Meir Ben Simon, have stitched together some of the 154 sonnets that are attributed to Shakespeare and turned them into a narrative piece performed by five young actors. Thespis perform the entire piece in their native Hebrew with two television monitors mounted onstage providing translation back into English through the use of subtitles. 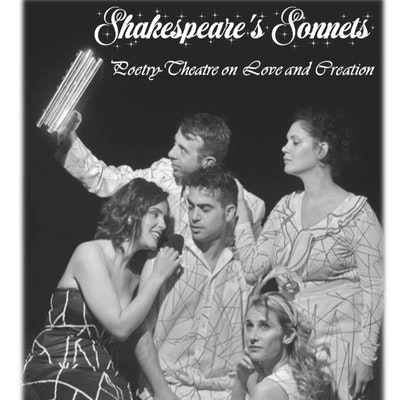 This created an issue for the predominantly non Hebrew speaking audience from the outset. The complex lyricism of the sonnets reward study and understanding of the ambiguity and duality of meaning; the rendition into theatrical parts, spoken in a different language, made this complexity extremely difficult to grasp. The audience could choose to follow by watching the translation on the screen, but only at the expense of seeing the actors perform, and even then the speed of the translation made any meaningful understanding virtually impossible. This is a real shame as the concept of utilising the sonnets to tell a story is one that has considerable merit. Whether the 'Fair Youth' or the 'Dark Lady' were onstage, the Bard always has something pertinent to say about age, vanity, jealousy or love, and the actors were fully committed in their performances.

We have seen successful adaptations into opera in the last decade and on a couple of occasions during the hour long performance, we caught a glimpse of the potential this idea could have. Whilst performing Sonnet 18 (Shall I compare thee to a summers day?), the cast worked in English, immediately the invisible barrier between them and the audience lifted and a real connection was made. I would imagine that Hebrew speakers in this, or future, audiences would enjoy the performance more fully, and hope that the technological part of the show is quickly dispensed with, allowing the artistic potential to more fully be shown.

Verdict: An interesting idea with considerable merit, flawed in its execution.