The Last Utopian is an interactive theatrical game which took place across Liverpool City Centre. Participants would enter a dystopian world, controlled by Selena; the figurehead of the new militarised society.

Upon arrival at the secret location, we were required to sign a 4 page waiver before we began agreeing not to sue the organisers if we were injured or died in the process; again adding to the anticipation of what lay before us.

There was 9 teams, each with a different colour. I was part of the white team and, as team captain, required to carry a flag with the word 'White' written on for the duration of the game. A task I managed to delegate to the other team members. We were each given a tattoo on our hands, a colour band to tie around our right arm and a coloured poncho correlating to the team colour we were in. On a dull day in Liverpool, the poncho also provided ideal protection from the heavy down pour we experienced. 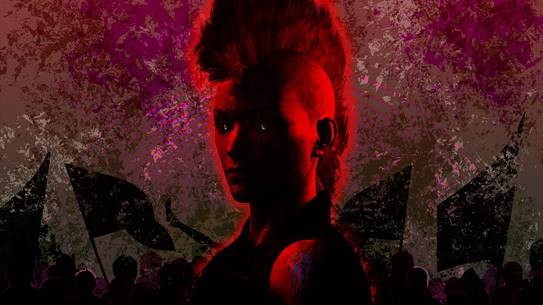 We were led into the court yard at the Bluecoat Chambers. The team were told to gather close to one another and we were placed in a large elasticated black band. Here we waited for Selena to enter onto the balcony. Selena was played by Ellie and she informed the participants that she planned to take over the city having had the Mayor kidnapped and taken hostage on the balcony. Selena introduced her army of Beaks. These were characters dressed in black robes, with bird-type beak masks carrying black weapons. We were informed in the instruction manual that these Beaks would be placed around the city and if they touch us we were out of the game and would lose the coloured band around our arms. The team who won the game were the team who arrived at the end point with the most amount of team members still with their bands on.

Selena's team informed us that tonight there would be a live transmission of a show called 'Reach for the Stars.' It was an X-Factor style talent contest and she said she would use this opportunity to take over the country.

We were then paraded to the large area in the city centre where confused shoppers stood and filmed on their camera phones, a physical combat between the Beaks and The Utopians. The Utopians were activists who had formed a music band, and worked undercover to oust Selena and her regime whilst simultaneously disguising as her followers. Following the combat one of the Utopians came and cut free the team and instructed us to follow him. We ran through the Saturday shoppers and hid in doorways as our Utopian leader checked in the streets ahead for our safety. He gave us a code which we needed to keep and we entered another location to watch a video and get a clue as to where we would need to use the code.

From the video screening, we headed up to the Central Library and needed to find a specific book to find a clue to take us on to the next point. Throughout the day we were led to various locations in the city including libraries, parks and gardens, train stations and little shops and kiosks. As a team we had to decipher clues, take on physical and mental challenges; at times losing our senses and being subjected to loud noises. One highlight was being in the Deletion Chamber, headed by Selena's evil right-hand man Dr Wellington (Adrian) and his team. Here we had to go through physical challenges which tested our reaction skills and balance and were met by a Utopian who helped us escape.

We eventually wound up in a kiosk which sold vintage articles near to Jamaica Street in the Baltic Triangle area of Liverpool. Stepping out of the game momentarily, some of us talked about how quaint it was and how we would be returning there to purchase some of their items. In the kiosk we were given a ticket to the final of 'Reach for the Stars' which was held in Grand Central Hall. We made our way to the venue and were met by a Utopian, who informed us we had to help hide her to get her into the venue, which would enable her and the other Utopians to overthrow Selena and her team before they took over the country.

We were sat in the audience next to three chairs where the judges sat and were treated to two performances; one was a dog called 'Woody' who did tricks similar to an act one would be treated to on Britain's Got Talent and the other was a mimed vocal and dance routine by 'Nancy.' Following the performances, the Utopians revealed their identities and overthrew Selena and her army, whilst images of revolutionary events showed on a big screen behind. These included the toppling of the statue of Saddam Hussein, images of Che Guevara and the more recent Arab Spring.

We were informed which team had won, sadly it was not the one I was part of. We had eventually lost three members by the time we had arrived at the final point.

The experience was a very enjoyable one and was created by Hope Street's Emerging Artists Programme who worked alongside Young Everyman and Playhouse (YEP), 20 Stories High and Pagoda Arts. The actors were fantastic and special mentions go to Carlos, who was the Utopian who led us around the city at various points and Adrian who played Dr Wellington. The game was extremely well organised if a little long winded but provided fantastic physical and mental challenges and an opportunity to immerse into a fictional world whilst life went on as usual around you.