The Secret Life of Mia, brought to us by the company La Banshee and performed by Amandine Vincent, is a poignant and confrontational piece of intimate theatre which immerses its audience into the daily struggles of a young woman suffering from an eating disorder. Amandine uses a combination of effective audio and site-specific material to give her story a truly authentic and believable feel, leading the audience to feel as though they were intruding on Mia’s privacy and accessing a world that is kept shut away from society for fear of rejection, insensitivity and maybe due to a lack of understanding.

Amandine, who has attended the Royal Conservatoire of Scotland as well as performed across the UK, including the Globe Theatre, Italy, France and China, is now based in Liverpool and her new company La Banshee aims to reveal and explore the hidden aspects of the world with particular emphasis on the feminine.

The audience is invited to put on their headphones and follow Mia about her day as she struggles mentally and physically with the consequences of depriving herself of the food that she needs. A strenuously beating heart as well as an uncomfortable rumbling noise coming from her starving stomach is the harrowing soundtrack to the journey the audience takes through the streets of Liverpool whilst Mia mentally recites her to do list. Snippets from different forms of media preoccupy her mind regarding the latest fad diet, a new app that counts calories and top weight loss tips from well-known celebrities, therefore exposing the relentless preoccupation those suffering from eating disorders go through. 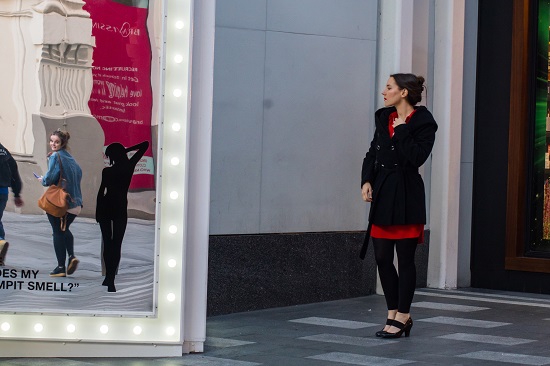 The intricate and subtle details that Amandine has included in her performance are integral to the authenticity of the production and must be applauded. From the self-conscious way in which she constantly tightens her clothing to cinch in her waist to the hidden food wrappers peeping out from underneath the bed in her apartment, where the show culminates, shows the shame and secrecy that is often involved with those suffering from eating disorders, yet it is portrayed in a sensitive way. The content of the performance is very relevant and even includes a nod to the unhealthy ‘selfie culture’ that preoccupies current society. The inclusion of such details causes us to ask questions of the society we live in and the damaging effects that such behaviour can have on individuals.

Due to the nature of the performance, external factors beyond the control of the performers or managers can and did occur. There were a couple of technical difficulties on the way to Mia’s apartment with the lift and members of the public sometimes blocking the view of Mia, however these are minor details that, although distract a little, did not detract from the quality of the performance and were dealt with seamlessly and professionally from all of those involved. When the audience were moved to Mia’s apartment there was more privacy and opportunity for Amandine to perform to her best ability and a particular moment including a struggle with a tape measure was particular agonising to watch yet very moving and poignant. If I was to make any criticism, I would say a group of six people is potentially too many as it was on occasion difficult to manoeuvre around the apartment without some members being unable to see certain aspects of the performance.

La Banshee’s production of The Secret Life of Mia is a challenging and ambitious piece of work but is nonetheless brilliant and will no doubt stay with previous and future audiences for a long time. Enjoyable is an inappropriate word to use for such a piece of theatre. It is uncomfortable and upsetting at times yet completely necessary for the message it intends to send and certainly holds up a mirror to society and the influence of social media in influencing women’s self-esteem and self-worth. To sum the performance up in one word, I would use brave. The Secret Life of Mia forces its audience to reflect and ask questions in a ‘no-holding-back’ fashion and exposes the ugly truth of the battles young women who suffer from an eating disorder face. It is an unmissable production and runs in Liverpool until the 10th October which appropriately falls on World Mental Health Day. I urge anyone available to go and see this performance as it is an eye-opening, significant piece of theatre.