The Rise and Fall of The Hamburger Queen - Unity Theatre, Liverpool

The Rise and Fall of the Hamburger Queen, better known as Ashleigh Owen, the one woman act boasting four characters, who takes us on a journey of her life up until this very night. A hilarious night of comedic flare and dance routines which you'll remember for years to come.

Beginning with a projection of images which shows the growing of the star character, you instantly get the sense of a personal journey, which is not something I expected from the title of show. A clever comparison of big characters, Liza Minnelli, Cher, Eastenders very own Pat Butcher to then the star of show Ashleigh Owen, the comparing of herself to such big characters fortell's the plot that she sees herself as a star, and rightly so. 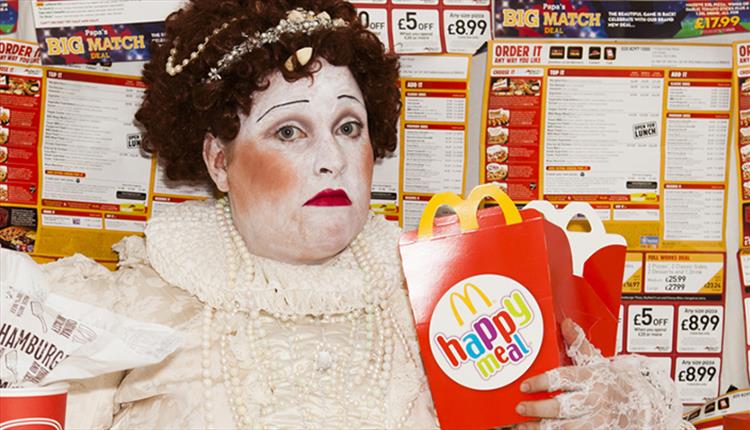 Packed with well known songs which add to the humour of the scenes, such as the birth of herself from her mother's womb where she reinacts this scene to prove she literally "Danced out the womb". She tells the story of how she follows in her late father's footsteps of being a dancer, much to her mother's dismay. Meeting the fourth character, Beverley, the "Super agent" who becomes not all she cracked up to be.

Cleverly put together by herself and Paul Burke, Ashleigh tells her story (which is warned to be taken with a pinch of salt) in stages which allows you to imagine her past experiences which she looks back on, before realising the story leads up till this very performance. I loved how this gave the performance such a raw effect, in the sense that it was funny, it was tongue in cheek but it was honest and relatable and she wasn't shy of admitting her knock backs and how her image may of held her back in certain aspects, especially within the audition process of the industry in which she is trying to break into. Still whilst admitting all this, she has a comedy approach on judging others which really allows us as an audience to feel the sense of comfortability in the personal humour she wants us to appreciate.

Continuously breaking the fourth wall and communicating with the audience, high fiving certain members and acknowledging the laughs of one audience member by saying "I haven't even said the line yet" really gave off the vibe that it was a story / journey and not "just a performance learnt and made up". She also used every day themes such as Nando's, Eastenders and even showed her disgust in being fired via snapchat.

Ashleigh portrays herself as a triple threat, so just give her a chance and go see this hilarious piece at The Unity in Liverpool - tickets are priced at £10 and is on till Saturday the 5th of November 2016.