Whilst a show about assisted suicide might not be the first choice for an evening of entertainment the cast of Assisted Suicide the Musical prove even the most taboo subjects can elicit a laugh. Liz Carr’s humour-filled exploration of such a divisive subject lives up to the expectations that the inclusion of ‘musical’ in its title creates, adding another a-typical musical the ever growing list of British musical theatre productions exploring non-traditional topics (the National Theatre is currently hosting a musical about cancer!). Indeed, in the current political and global climate Assisted Suicide: The Musical expands its scope to comment on the culture of fear that we constantly inhabit as Carr – who many may recognise from Silent Witness – explains her stance against assisted suicide in this “TED talk with songs”. 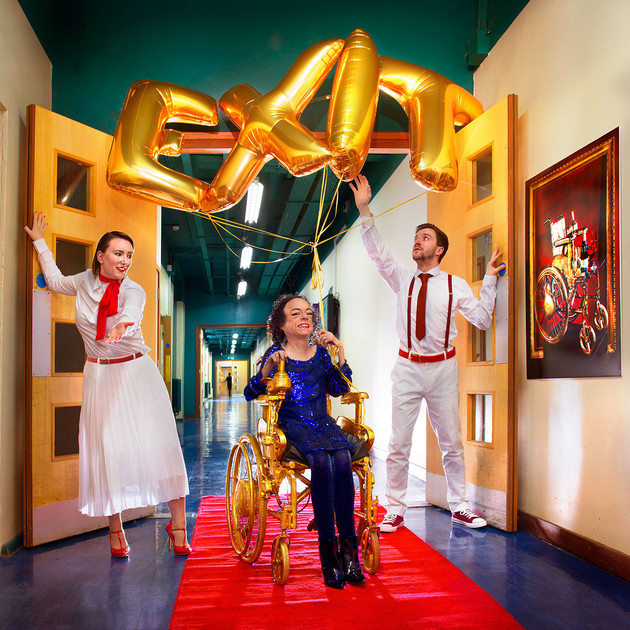 Liz Carr comperes the evening, guiding the audience through a variety of musical numbers – highlights of which include a wonderful duet with her unexpected ally against ‘dignicide’ the Pope and a hilarious duet with her pro-euthanasia alter ego documentary Liz. She is assured, bitingly funny, self-deprecating and sharp, eliciting gasps, laughter and tears from the enraptured audience. Carr is supported by a quartet of performers who, due to the nature of their supportive role, are doomed to shine less brightly than Carr (who is appropriately glittered up for ‘the spectacular world of musical theatre’). Their limitations are also highlighted by stodgy choreography, poor sound design and backing tracks that lack subtly. There is an obvious rapport between the cast and some nuanced delivery, especially from David James ticking the ‘diversity box’, but if the show is to achieve its potential then it needs to ensure that the musical elements match the content and quality of Carr’s writing. Assisted Suicide: The Musical is deliciously naughty, hugely moving and thought-provoking and it will be very interesting to see how the show continues to grow and develop.