Cilla and The Shades Of The 60's - Theatre Royal, St Helens

From the buzz in the air at the Theatre Royal, St Helens, 'Something Tells Me Somethings Gonna Happen Tonight' and indeed it did! The Shades of the 60's are actually a trio of girl singers comprising of Anna Slater, Emily Clark and Nicola Twardowski, who took to the stage and performed their hearts out. From the start they worked the audience encouraging dancing singing and clapping along, their enthusiasm was infectious. These girls are an act in their own right and should not be mistaken as backing vocalists.

They, along with four girl dancers, kicked off the show which although is predominately about Cilla, jogs memories of artistes who made up what became known as the Merseysound plus other stars from the 60's. A Beatles hit 'Twist and Shout' set the mood and pace with the audience showing how they can 'Mash Potato' in 'Do Ya Love Me?'.  There is mention of Merseysides, Gerry and the Pacemakers plus The Shadows, The Hollies, and Billy J Kramer. Video footage at the back of the stage was cleverly used to introduce Cilla to the stage, or rather Victoria Jones, but I feel more use of it could have been made and is was a little sketchy in its use.  Victoria like Cilla is a Liverpudlian and rightfully proud of it and is perfect to portray 'Our Cilla' the working class girl from Scottie Road. With red bobbed hairstyle and authentic costumes she looks the part. 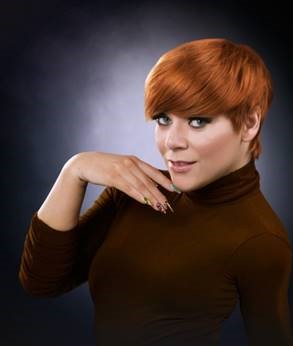 The Cavern Club is fondly remembered as the place The Beatles started off, but Cilla also began her career there, although as a cloakroom attendant initially!  Singing 'Anyone Who Had A Heart' displayed Victoria's fantastic vocals which continued throughout the evening with iconic songs such as 'Alfie', 'Step Inside Love' with the aforementioned 'Something Tells Me'  taking us to the interval.

The Shades of the 60's opened up the second half with a medley of songs before each sang a song individually. The girls are all personable and interact well with the audience ensuring a party atmosphere for much of the evening. Victoria returned to the stage, and joined the Shades with 'Nancy Sinatra's 'These Boots are made for Walking' and an amazing rendition of Dusty Springfield’s 'Heart and Soul'.

An amusing sketch of Cilla's Blind Date TV dating programme was recreated with a male member of the audience taking part. Although this was entertaining it was all so predictable and felt more like something to fill time in, more songs please. The show runs a little under two hours including an interval and brought a standing ovation from the packed theatre at the end. The calls for 'more' appeared to be going unanswered and people began to leave the auditorium but Cilla and the Shades of the Sixties along with dancers, burst back onto the stage a few minutes later. The reason for the delay was an obvious costume change which was not really necessary so late in the show, we had seen several throughout anyway so maybe leave the dancers on stage so we know you are returning!

The show brought a 'Lorra Lorra' great songs, good choreography, was entertaining although could have done with a little more content but overall with no 'Surprise Surprise' here, a great show which certainly had everyone up and dancing this evening.