Burjesta Theatre Company took to the stage at their place of residence at The Casa Bar in Liverpool, where war was the subject of performance, and through the language of Shakespeare.

Performing extracts from Shakespeare’s historical pieces, the 12-strong cast took the audience on a journey through our famous playwrights’ work which told of the trials and tribulations that many suffered during the 100 Hundred Years War and the War Of The Roses.

In typical fringe-festival style, the cast had to make the most of a minimal costume and set throughout the performance, putting a greater focus on the actors to bring to life the Shakespeare’s unique language, and thanks to the energy and diversity of the cast, and of course the critical input by director, Julian Bond, this was something that was well achieved. 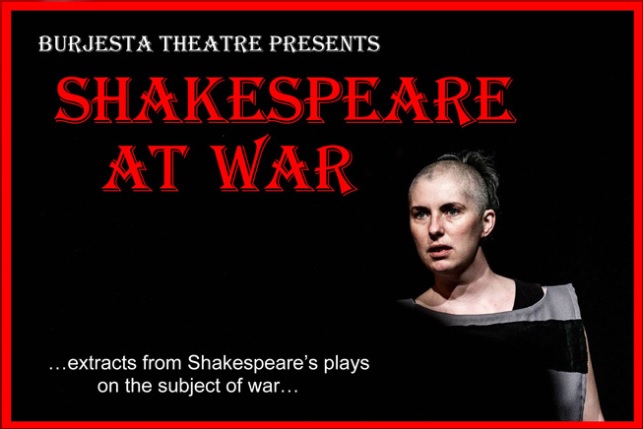 Perhaps, in my view, the most impressive aspect of the performance, was the choice of extracts used from the historical plays. Whether it was the citizens of France fleeing with terror in Edward III; The battle cries of Henry V urging us “once more unto the breach”; Or the advice a war-torn Henry IV gives to his son on his deathbed, each choice of piece from those historical works gave us, through the words of Shakespeare, an insight into how war affects all walks of life.

What the cast clearly brought across, whether it was the soldiers on the front line of the battlefield, or the nobles and royalty discussing the politics and diplomacy, was what the sheer cost of war can be and how, particularly during those years somewhere between 1346 and 1483, what damage the seemingly endless conflict could do to destroy entire countries and the lives of so many people.

The Burjesta cast displayed good diversity as they weaved in and out of scenes and characters. Narration between scenes by Bob Towers made changes in time and events clear to the audience throughout.

It was clear that the cast were not afraid to jump between completely contrasting characters. Peter Durr’s character of dark and sinister speech for the character of Rumour from Henry IV at the start of the performance, was contrasted brilliantly by his later interpretation of the enigmatic Falstaff from the same play.

Another was the stark contrast between the valiant and noble York played by Maria Hutchison, and right at the other end of the scale was her portrayal of the Father in Richard II who, upon killing a man and willing to loot his corpse, realises to his horror that he has slain is own son.

These are to mention just a couple of names, but it must also be noted that every member of the cast  boasted their dexterity in shifting between characters and locations along with some help from clever and subtle costume changes, making the ebb and flow between scenes all the more smooth.

What Burjesta Theatre did during their performance was bring to life each piece they took from these historical plays, something that is crucial in helping the audience understand Shakespeare’s exclusive tone of voice.

They company also made me leave with a message in mind. Whilst the times may have changed and the conflicts in much differing places, in the words of Brutus in Julius Caesar, war will always create “tide in the affairs of men”.

Burjesta Theatre have now been on the cultural map in Liverpool for six years, and in that time have completed fourteen productions and 70 shows. They are currently taking part in the inaugural Liverpool Fringe Festival taking place in June.

Their next performance, Franca Rame Monologues, will be on the 20th June at 7pm, once again at The Casa Bar. For more information on Burjesta Theatre, and their work past, present and future, visit www.burjesta-theatre.co.uk.

The Casa Bar are one of the busiest venues in Liverpool during the fringe festival, for details on what events are taking place there and across the city for the rest of the month, visit www.liverpoolfringe.co.uk.