By gum, it's grim up North, and that really is a big problem. Including plays: just as conveying boredom risks boring the audience, something full of miserable characters living miserable lives, you get the idea...

It is leavened with humour – has to be, but mostly as a result of snide remarks and shocking comments in this tale of warring mother and daughter, the former excusing her bad behaviour by insisting 'they enjoy it'. And especially given the setting which evokes a cramped, grotty flat in a rundown area. However, it's a shame the set design means every entrance and exit has to allow for avoiding a chair. It's as distracting as the all too frequent business: the pointless shifting of props; a haphazard pile of books is moved a matter of feet, neither for any useful purpose nor even just tidying them up. That degree of carelessness is also reflected when characters go to bed fully dressed; using what looks like a book from the turn of the century for a modern childcare guide etc. You get the picture, or rather, you won't, because of lack of attention to detail. 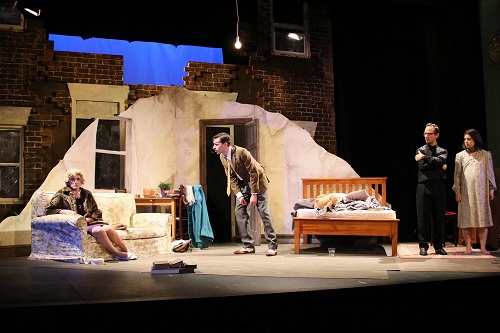 Likewise, Sharon Byatt as the mother, Helen, spends a lot of time not so much acting as staring into the audience as if trying to gauge their reaction. Somehow, she gains our sympathy a bit more than Jo (Sophie Coward), although, even if the woman seems to turn at the end, ie, fleetingly nicer, she is simply going for the lesser of two evils. Unfortunately, the daughter is whiny, malicious and needy. OK, like mother, like daughter, and they're both resilient, in their own way; Helen, seeking out other men, Jo, fiercely independent. Ironically, the most appealing character is the boy (Jimmy?) whom Jason Lamar Ricketts portrays with sweetness and charm. The villain of the piece? Lot of competition, and you can't help feeling that he hasn't really abandoned Jo. A close second is James Templeton as Geof, tenderly caring for her but he tends to be loud and shrill although often given cause. As for Peter, Chris Pybus successfully makes him thoroughly obnoxious, a good (or rather, bad) match for Helen.

It is a long play, relentlessly on the dark side: plot, dialogue and characters. Indeed, the interludes, when Jo is with the boy and later, with Geof, are almost as pleasant for us as for them, and we need a glimpse of this happier, more playful side of a girl with no friends. But the duels with her mother should be mesmerisingly awful, rather like those of George and Marth in 'Who's Afraid of Virgina Woolf', instead of which, mostly, just plain awful. Still, Sophie Coward does make a realistically stroppy teenager, fleetingly coming into her own at the very end, even if it should still be a hell of a lot more poignant.

You cannot help but wonder how much of the play is autobiographical, and assume that the 18 year old Shelagh Delaney set out to be as controversial as she possibly could: gay lodger; mixed race love affair; mother involved with much younger man. Of course, the big issue nowadays is political correctness, making sure nobody ends up offended, so a few marks to a show with more than a few shall we call them lively comments. After all, they set the historical context, and interestingly, mostly got the audience laughing.

However, the previously mentioned factors seem commonplace these days, unlike plays from working class women. That certainly gives this piece rarity value, but sadly, this production is not worth much, and the two stars are as much for the playwright herself.