Remembrance week of the centenary year of the end of the First World War is the right moment for a re-enactment of Blackadder Goes Forth and under the direction of Nick Fawdry, Carlton Players serve up a fitting and moving tribute.

The script – written by Richard Curtis and Ben Elton some thirty years ago – has stood the test of time with slapstick humour and gags galore: it really is jokes away in this clever stage adaptation of four of the original episodes.

As good as the writing may be, it also demands a capable cast to deliver it and we are not let down by an experienced crew of Carlton stalwarts with the action in all four pieces centred around Captain Blackadder (Mike Sanders), Lieutenant George (Marc Smith), Private Baldrick (Graham Breckon), General Melchett (Gareth Crawshaw), and Captain Darling (Alexander Breatnach). 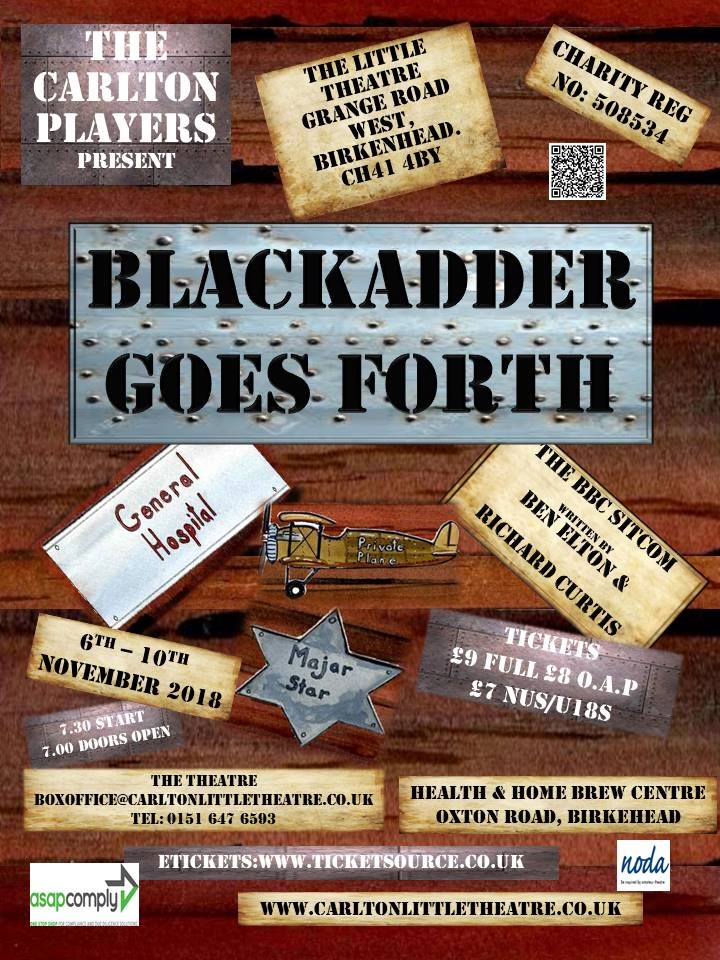 It is an obvious port of call to draw upon and repeat the television characterisations which is admirably achieved by Crawshaw, M Smith, and Thunder; Breckon’s Baldrick does that and more; Sanders, as belies an actor of his experience and quality, delivers his own Blackadder and the production is all the better for it as we get a character deeper and richer than the one-liners – funny as they are – on offer. It is hard to put into words, but Sanders conveyed the unease beneath the character’s surface exquisitely: despite the constant wit there was a real sense of foreboding.

To perform at this level, you also need the necessary support and again we were not let down. The presentation of the stage perfectly caught the trenches with split staging revealing a general office in one scene, a prison in another. This was wonderfully augmented by great lighting, sound, and costume. The flying scenes are cleverly delivered and in contrast to the barrage of wonderful humour throughout, the ending is immaculately performed and left the audience hushed and stunned. We would have loved a curtain call to properly pay our respects but how can you when no one is left standing: a powerful and moving moment indeed. Well done Nick and all.

Blackadder Goes Forth runs through to Saturday 10th November 2018, doors open at 7.00pm with performances commencing at 7.30pm. Tickets £9 (£8 OAPs, £7 NUS/Under 18) and available at the Box Office on 0151 647 6593 ( email: This email address is being protected from spambots. You need JavaScript enabled to view it. ) or via www.ticketsource.co.uk/thecarltonlittletheatretrust