LIPA have tackled the famous musical Cabaret and have created a production to be proud of. The team have clearly thought about the current political issues and tied them in with the original production. The clever use of film from 1940’s Germany married with present day news footage added some contemporary context and reinforced how tragically timeless the story is.

The cast showcased their skills with excellent choreography and singing and clearly worked well as a team. There was a strong sense of camaraderie from the cast seen through their comfort and trust in each other.

Sally Bowles (made famous by Liza Minnelli) was portrayed by Katie Hargreaves. She bought charm, playfulness and depth to her performance and blew us all away with her powerful vocal. Her boldness contrasted well with her lover Cliff Bradshaw (Joe Lindley). Initially, Lindley’s Cliff was charmingly out of his depth in the world of Berlin, a sentiment which the audience could relate to. His evolving relationship with Ernst (Michael Wolf) is captured by both actors brilliantly. As the play progresses, so do both of these characters and their performances capture the journey beautifully. 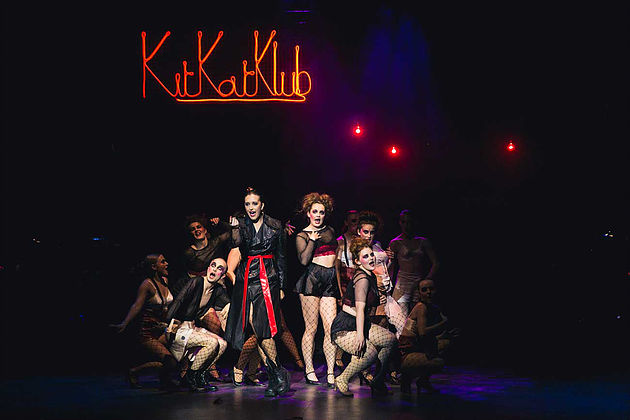 The moving story of the older couple Herr Schultz (Daniel Henry) and Fraulein Schneider (Franki Burke) put into context the awful atrocities at this time and their acting was well done to highlight the sad nature of their relationship. Henry portrayed the character of affable Herr Schultz with quiet confidence and a hint of fragility – bringing warmth to the stage whenever he appeared. Frau Schnieder was believable and sympathetic. Schieder’s battles with Fraulein Kost (Beth Elliott) were not only well played, but gave us so much of Schnieder’s uncertainty and Fraulein Kost’s manipulative tendencies. Her character arc was illustrated by Burke with skill and finesse – in particular during the events of the second act.

Laura Noble was our Host. From her first step on stage she captivated the audience and drew them into her world. Her effortless confidence and cheeky asides brought the character to life. Not only was her acting on point – but her songs were delivered just right. When the scene called for domination and power, she delivered. When the scene called for softness and vulnerability, she delivered. In the latter half of the play, when the story takes its turn, it is through her performance that the audience realise that the party is well and truly over.

The costumes enhanced each character – Cliff’s muted colours, Sally’s elegant nightgowns and of course; the Host’s black Commandant coat and red belt. Every costume enhanced the 1930’s setting and there were many that showed off the mischievous nature of the first half.

The set was minimal, but slick. Suitcases were used as building blocks to create many different locations – trains, apartments, nightclubs and corridors – all of which came to life seamlessly as the working men and girls hauled them into place in between scenes. The actors at times became integral parts of the set holding doors and windows to help create different sets – in some of the more dramatic scenes their silent, emotionless presence added a static and uncaring coldness.

The orchestra carried the wonderful music extremely well and managed to enhance the production with clarity and purpose. The music was exciting and well produced with loved favourites remaining in the piece such as Two Ladies and Money. Interestingly the production did not include Sally Bowels' Maybe this Time which would have been nice to include.

The production utilised the space of the theatre and having the actors within the audience was effective and exhilarating. It made the audience feel a part of the musical and with such an important message it worked well to make people feel involved. This show should be celebrated for balancing such a famous musical with current political debates and it was obvious how moved the audience was at the end.