Gorman and Tontoh are currently stand-ins for Mike Hugg, another original band member and Rob Townsend who unfortunately are both ill at the moment but hopes to rejoin the band later in the year. The Manfreds reformed in 1991 and have been very successful touring with their latest Hits, Jazz and Blues show and have a loyal fan base judging by their attendance at the Floral Pavilion, New Brighton (especially when the Liverpool, are performing in the UEFA Champions League final the very same night!)

'The One In The Middle' is a humorous opening song which introduces the band members one by one and is sung tongue in cheek by Jones who just happens to be the one in the middle and for whom the song implies the audience have "come to stand around and see the singer lookin' sweet!". Actually, the band are introduced several times throughout the night which wasn't really necessary, I did get the feel it was more of individual artists performing rather than as a band and I feel introducing them so much emphasised that. There is little dialogue between them and even introducing songs there's more of "this is the next one" with Jones not always sure which album it was off or “it's the 'B' side of something." It would be good to hear a little more information about the chosen tracks. 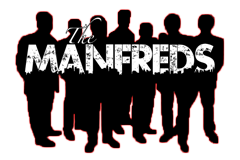 At 77 Jones still has plenty of energy and his vocals are as good as they were in the 60's. He loves to engage with the audience encouraging sing-a-longs with fondly remembered songs 'Pretty Flamingo', 'Mighty Quinn', '54321', and the one that you leave the theatre with the tune firmly stuck in your mind, 'Do Wah Diddy!' (go on.... you're singing it now aren't you?) But the show isn't all pop and focuses mainly on Blues and a smattering of Jazz with Jones superbly demonstrating his talent with a harmonica which awarded him the British Blues Awards Harmonica Player for three consecutive years, 2010 -2013. During the Blues numbers the songs are really drawn out with extended instrumental and vocal parts and although there's no denying the talent it began to feel tedious.

McGuiness, after leaving Manfred Mann continued to have success forming the group McGuiness Flint who had several hits including 'Malt and Barley Blues' and 'When I'm Dead and Gone' which he went onto perform wonderfully tonight. He was also given the opportunity to perform songs from several other albums he has released throughout his career.

Cliffe had the audience captivated as the other band members left the stage for his solo of a Curtis Mayfield classic ' People Get Ready' and deservedly received rapturous applause. This is not an audience to rise to their feet throughout the show which is probably more due to the fact that most were probably in their youth back in the 60's than not acknowledging the talent on stage but did give a standing ovation at the end!

Obviously with Blues and Jazz saxophone features significantly and Currie did not disappoint with excellent skill, almost making his instruments talk. Both Gorman and Tontoh fitted right in musically, an asset to the band.

After a final apt song of 'If you Gotta Go Now' the band gathered in the foyer to sign autographs and sell their individual merchandise.

I'm not sure from the audience if it was all that was expected as there was definitely more positive reaction to the early pop hits but the show delivers exactly what it says on the ticket..... Hits, Jazz and Blues.

The tour continues and dates and tickets are available at https://www.themanfreds.com/tourdates.php