Horse & Bamboo and Little Angel Theatre present Suffrajitsu, a family friendly, educational story of the suffragettes and their fight for the women’s fight to vote, with the added bonus of their lesser known use of jiu jitsu as a means of self-defence and protection of their comrades.

Directed by Esther Ferry-Kennington, the show opens with Gemma Khawaja and Alice Rowbottom asking the audience to sign their petition to save their dojo from closure. As they enthusiastically attempt to get signatures, Gemma takes the opportunity to tell Alice the story of the suffrajitsus, women who used martial arts during their lives as suffragettes.

The opening scene is done against a background of fluffy white clouds which the actors moved in a way which is reminiscent of the way flashbacks are done on television. The actors also signed BSL themselves while performing, a lovely touch which prevented the detachment which can sometimes happen when the interpreter is off to the side so audience members are unable to watch both the interpretation and the performance fully. When the actors moved the puppeteering, the BSL interpretation moved to a screen in the centre of the stage which maintained this effect.

The story of the suffragettes was performed almost entirely with puppets, using a combination of beautifully made figurines, clever cardboard cut-outs and shadow puppetry. First we meet Annie, a young Lancashire mill worker who is looking forward to voting at the mill for the education of all children. 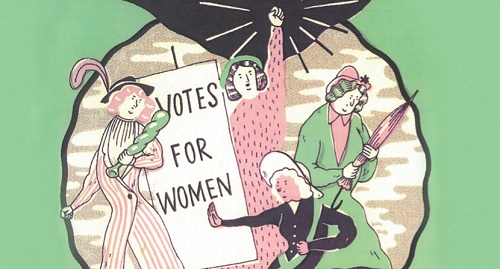 She meets Helen, a character comprising elements of Millcent Fawcett and Emmeline Pankhurst, who points out that, as a female, Annie probably won’t have the right to vote. Annie is sure that this isn’t true, but Helen says to come and find her if she ever needs help, before going to deliver her petition for women’s suffrage to the Houses of Parliament.

Inevitably Annie soon finds out that only the men in the mill will be entitled to the vote, and so she follows Helen to London to ask her to come to her aid. When she arrives however, the men of London are angry with the women for uprising and Annie soon finds out that Helen has been arrested and is in jail. Edith, the suffragettes’ jiu jitsu trainer, tells Annie she shouldn’t worry as Helen has been in jail several times before, but Annie worries as the vote at the mill is coming and she needs to get Helen there before it happens. So Edith rallies the suffrajitsus and a covert rescue mission begins in earnest.

Both Khawaja and Rowbottom give emotional and amusing performances throughout the play, whether performing themselves or through the puppets. Annie’s loss of innocence when she realises the truth about the world she lives in is particularly palpable.

The show is very funny, with lovely gentle humour mixing with the educational elements of the piece which left the children in the audience laughing out loud while they were learning about such an important part of history.

Relating the story to the contemporary dojo closure sub-plot ensured that the triumph of the suffragettes wasn’t lost in the fact that there is still work to be done before equality in society is achieved.

This is a lovely play which gives a good overview of the suffragette cause, combining it with comic book style martial arts which will appeal to adults and children alike, and is sure to inspire people to learn more about the suffragettes, and the suffrajitsus.

Suffrajitsu is being performed on tour until 13th October 2019. More information is available here https://www.horseandbamboo.org/on-tour/