Dead Chatty by Jess Flaherty and Charcoal by Caitlin Clough are two one-act plays from Original Man Productions in its first full scale performance, both directed by Clough, with the shared premise of there only being one way out.

We open with Charcoal, a half-hour piece, about three people surviving in an abandoned school gym following an apocalypse. Sofia (Sophie-Rose Dand), Jason (David Freeman), and Olive (Rosie Twigg) are ex-staff members of the school where they now cook, eat, and sleep, hiding from an unseen threat outside. Fears and hopes are explored through their curious love triangle whilst we wait to discover what is really lurking behind the boiler room door.

It’s an interesting construct interspersed with humour that adds to its authenticity but needed greater emphasis on action rather than words alone to create and reinforce the innate suspense one would expect to find and it certainly felt like a missed opportunity when we were told the ending before seeing it. It can be a risk to direct your own work and whilst Clough is undoubtedly a talented creative – she is an accomplished actor, director, and writer – I wonder whether handing the directorial reins over might have helped to wring a bit more from this thoughtful piece. 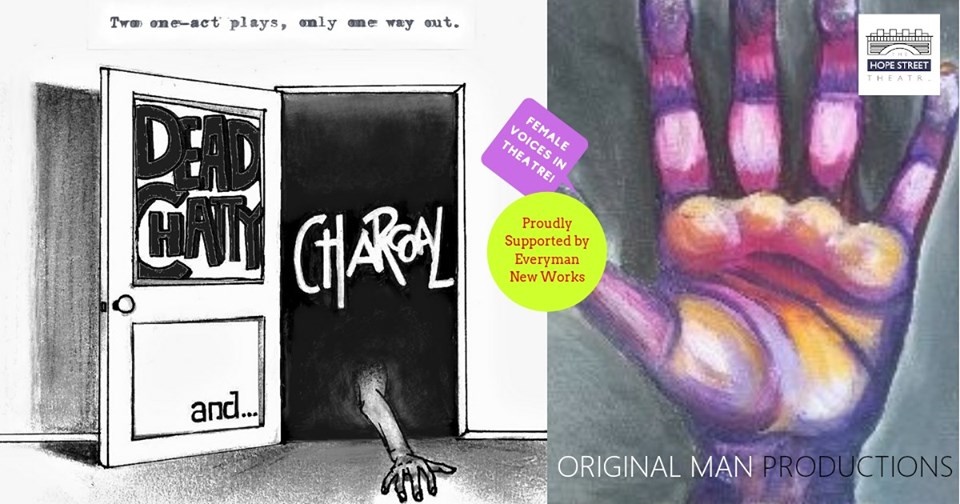 After an interval to facilitate scene changes, we moved onto the longer piece of the evening, Dead Chatty, where we meet a group of women in a strange therapy room being guided by Clara (Helen Webster) to reveal their stories as they move towards personal acceptance. Lucy (Geraldine Moloney Judge) does not want to be there and becomes more aggressive when pushed on why; Kathryn (Claire Crossland) is slowly balancing her inner zen; Eva (Flaherty) is over-coming post-natal depression; and newcomer Rose (Katerina Hill) maybe shouldn’t be there at all. Who’s going to come to terms with their past and get to leave the room first?

Coming in at over ninety minutes without an interval, it might have been better to have made this the first piece of the evening. It has an interesting idea at its heart, but it tried to cover too many bases as we alternated between obvious comedy and heart-wrenching drama with the balance a little out of kilter in my view when it touched upon sensitive topics such as suicide.

There was too much tell and not enough show for my liking and as much as I enjoyed Webster’s powerful portrayal of Clara, the narration too often got in the way of the action, and I felt that the deep intensity of Rose’s story was lost as the piece overrun towards the end and the temperature in the auditorium became uncomfortable. The choreography behind the monologues was inspired and impressive and allowed a talented cast to showcase their ability with Crossland particularly expressive. Moloney Judge was strong as one has come to expect although I worry she is at risk of becoming typecast.

There is a great piece of writing lurking here that called to mind Sartre’s Huis Clos and with a strong edit it has the potential to match and perhaps surpass that piece’s brooding intensity.

I understand there had been some technical challenges on the day but there was certainly no evidence of it in either performance and the staging for both pieces was simple and all the more effective for it in the capable hands of Liana Jane Bourne.