Tonight, was my first time at ‘The Little Theatre’ in Birkenhead. To be honest I was expecting to see the musical version of the show as I’ve never heard of anyone putting on the play version before, so it was a night of many surprises.

It was opening night and all of the proceeds were going to the ‘Belvedere Centre’ a community centre for young disabled children and their friends, so a great cause and such a shame that the audience was barely half full.

The Carlton players had a very small cast on stage featuring only 9 performers in total. One of whom was only on stage for a matter of seconds.

Written by Robert Louis Stevenson, the story begins as Dr Jekyll is on the brink of an experimental discovery and spends the show switching between himself and his alter ego Mr Hyde. 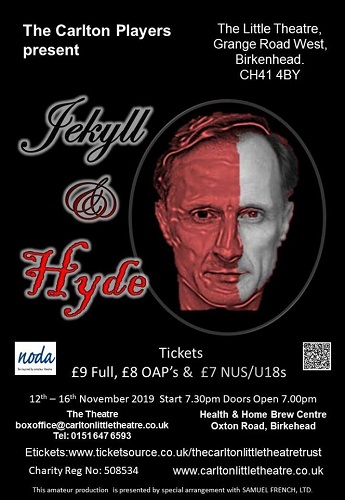 Let me talk first of all about the technical aspects, because for me the planning of the staging wasn’t ideal. The set stayed the same throughout the entirety of the performance and consisted of a living / dining room, and a workshop at the very back of the stage. The majority of the action took place in the main space so I understand the logic, however the visual aspects of the show were lost in parts due to how far back the doctor’s experiments were happening, the lighting didn’t help matters either, being so dark at times.

I also lost a lot of text, especially from the female members of the cast, and the audio in general from the mics wasn’t perfect.

Having said that it was the first night, and I’m sure things will settle, I would say moving forward for the rest of the run ‘project’ we want to hear the lines.

Costuming was very minimal and other than one of the female cast they all kept the same costume throughout, attention to detail wasn’t perfect, the Butler seemed to be better dressed than the gentlemen.

The makeup for Both the ‘child’ and ‘penny’ was great work by Louise Campbell, using bruising and fake blood. Very realistic.

During the first scene we meet, Sarah Jones who gave a nice performance as a believable snobby aristocratic Celestine the love interest of Dr Jekyll. Great accent, posture and sophisticated air to her, but sadly too quiet to hear on occasion.

Dylan Russell as Charlotte the maid brought some light and shade to show, and she shone in particular with the comedy elements.

A nice cameo in the role of the maid Hilda from a lovely Christine Smith. Very well rounded polished character. That brings me to the man himself, in the title role, Dr Jekyll expertly portrayed by the wonderful Jonathan McGrath really did steal the show. His characterisation, physicality and accents were spot on and he truly gave a television worthy performance. Breaking between two polar opposite characters with ease and fluidity. This guy deserves a full audience.

All in all, a nice evening at the theatre and something very different and worth a watch.