The play begins with an open discussion between the two men about anything and everything. Person 2 is looking at flights to New York which leads to a discussion about Person 1’s former experiences of America and Person 2’s fear of flying. This is very indicative of characterisation, with Person 1 being a seemingly outgoing, confident person who is still following is dreams, while Person 2 is quieter, more restrained, and has given up on his career in music.

Person 1 tells Person 2 he did think about writing a play about it, but it never came to fruition. He then has an idea for a new play, and it is at this point that the play becomes about writing the play that we are watching. Person 1 describes the first scene and the current scene and this continues throughout the rest of the show. Person 2 is on the whole very negative about the idea, stating that people would not get it and you cannot write a play where nothing happens.

The performances are good with some solid characterisation by both Wright and Murphy. Both characters are believable. As they chat and make fun of each other, it is clear that there is a basis of genuine affection within their relationship and the chemistry between both actors is good.

The set is simple, featuring a white sofa and a black armchair, cushions, a pair of shoes and a couple of notepads which allude to the creative elements of the characters’ personalities. The black chair is slightly lower than the white sofa, allowing height to be exploited to illustrate status of the characters.

The show is around an hour in total but does feel quite long due to the incredibly slow pace and the fact that very little happens. There are some mildly amusing self-deprecating references to the theatre, and some good jokes with the lighting, but on the whole the play is only about being very clever without having any real point to it at all. There is some exploration around following your dreams and whether or not this is worth it, but this doesn’t really come to fruition due to the nature of the dialogue circling around the same idea.

You can find out more about future performances of The Last Will and Testament of Henry van Dyke on the Facebook page https://www.facebook.com/pg/TheLastWilland1/events/?ref=page_internal 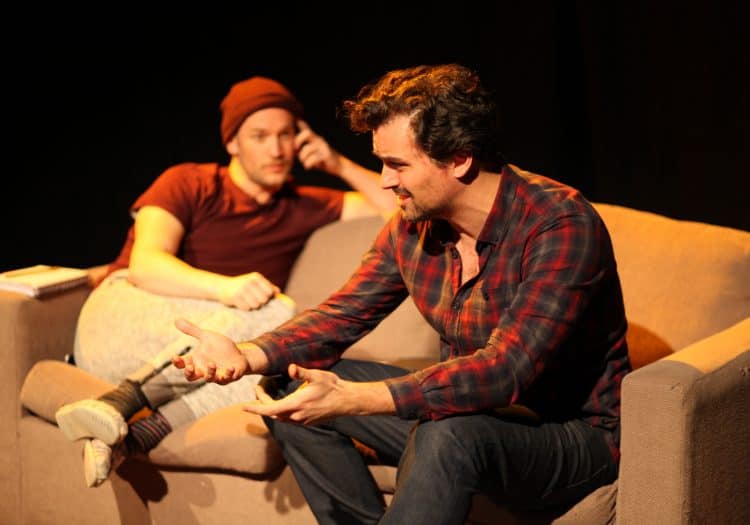