Ensemble 10/10 is all about new worlds and conductor Duncan Ward’s programme takes us further as we explore the cycles of life and death through five separate pieces that explore this theme through either its human form or through nature.

The opening piece is Samantha Fernando’s Formations which was written when she was expecting her first child and refers to the formation inside her and her imminent motherhood. This was an emotive piece that caught the ups and downs of her emotions with harsh aspects offset by softer gentler tones, with the string section, cellos, clarinets, and double basses particularly to the fore. 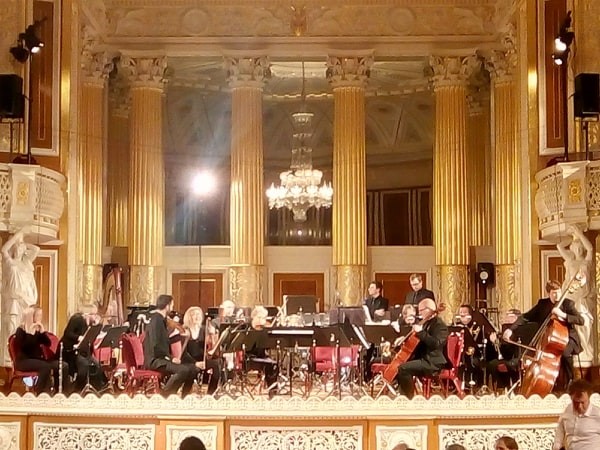 Following a quick ensemble adjustment, the second piece was Brett Dean’s Pastoral Symphony which was written twenty years ago on his return to Australia in a piece which delights in the sound of birdsong – which is sampled tonight – whilst conveying the very real worry of the human impact through urbanisation, with the piece somewhat more evocative given the recent natural disasters to befell the country. The gentle buzz of bees and accompanying birdsong was soon offset by an orchestrated frenzy of violent destruction that was hard to listen to, but which was its very point: we are masters of our own rise and fall as the timpani and percussion so clearly demonstrated.

An interval allowed for a major reorganisation of the orchestra for the next pieces starting with Ward’s own composition entitled Greenhurst Way which reflected his late grandfather’s love of the unspoilt nature of the Lancashire moors. There was a certain dissonance reverberating through the piece that not only captured the very rawness of nature which makes it so beautiful but also the rawness of personal loss.

In a change to the published order we then had Webern’s Symphony, a more traditional air which slowly builds up its elemental forces through gentle horns and some rich clarinet playing from Emma Burgess and Ausiàs Garrigós Morant with further moving accompaniment from the string section providing a crystallised purity as the instruments merge and blend.

The change was a good idea as we finished on the more upbeat tones of Darius Milhaud’s La Création du Monde and a world was truly created with Rob Buckland’s alto saxophone reflecting the authentic jazz Milhaud heard on the streets of New York’s Harlem in 1922 which was to influence this and future compositions. The flutes of Cormac Henry and Helen Wilson thread a suitable air of melancholy that took this piece up a further level.

The challenge of this evening was undoubtedly the very different nature of each of the pieces despite the commonality of the overall theme and it is much credit to Ward and the demonstrable skill of the ensemble that they perfectly crafted their way through each of them. Ward is jovial and entertaining, and I appreciated his introduction to the pieces and his enthusiasm clearly found a welcome home with the orchestra who delighted throughout and particularly with the inherent jazz overtones of Milhaud’s closing piece. I was pleased to see a good blend of youth and experience in the ensemble which bodes well for the future of the orchestra and us as an audience.

St George’s Hall is an architectural delight inside and out and the Concert Room provides a rich tapestry to perfectly accompany the evening’s entertainment.

Royal Liverpool Philharmonic has numerous events scheduled throughout the year including further ensemble pieces planned to perform at St George’s Hall so please do get along and support this wonderful institution that we are fortunate to have so literally on our doorstep. Further details can be found at https://www.liverpoolphil.com/