Succour Punch theatre demonstrate, at times, impressive theatrically comedic sensibilities – it’s seen in Tony Blair’s camp caricature and the explosively sexual entrance of the infamous pig David Cameron ‘allegedly’ toyed with. They even bring out some endearing choreography to accompany the auto-tuned soundbites of their targets. For all these reasons, I’m led to believe a simplified version of the show would perform excellently as a piece of cabaret. As a piece of theatre brave enough to call itself ‘satire’, I’m afraid it doesn’t pass the mark.

Alarmingly, this piece of ‘satirical’ work appears to have nothing to say. The bulk of the content shown isn’t even the property of the company. Tracks being taken from famous artists and social media content providers like JOE UK act as the spine of the piece as opposed to decorating it, and the cast dancing on stage in Maggie Thatcher masks for a few minutes to one of these quirkily inventive tracks merely serves as a secondary commentary to an already thin one. 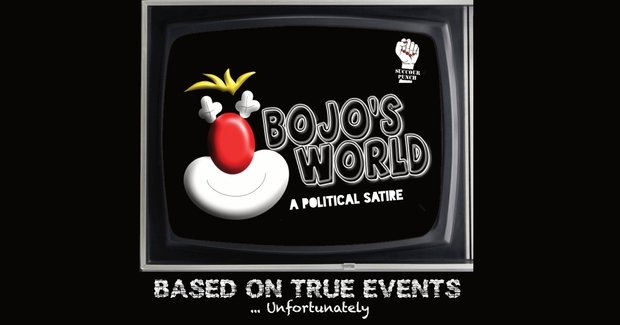 It’s devoid of a primary attitude and distant. They drown their own voices through others, which suggests to me perhaps they don’t have one – to simply emulate is to commit satirical and comedic suicide.

Most concerning is the fact that even the aforementioned performance choices add nothing to the ongoing political crises beyond ‘Boris is bad’ and ‘don’t vote Tory’. It’s patronising and insulting to an audience’s intelligence, suggesting we aren’t smart enough (or perhaps more accurately, brave enough) to interrogate the complexities and uncomfortable truths of our political discourse. In many ways, this work is actually symptomatic of the political disease that is perpetuated by our echo-chamber media dictated by algorithms that choose only to show consumers content that supports the point of view they hold already, putting ourselves and those we may disagree with further apart by proxy. Generally speaking, the theatre scene is typically guilty of this, but Bojo’s World sadly does a tremendous job of flying this flag; successfully decorating itself as a piece of work that’s self-aggrandising, simplistic and worst of all, divisive. It’s not uncommon thought that the arrogance and aggressive insistence to conform to left-leaning political affiliations is something that actively led to Boris Johnson becoming PM. When you open a piece of satire by instructing Tory voters to leave and demonstrate a lack the self-awareness to address this totalitarian mandate by the end of it, joke or not, you lose all credibility as self-confessed satirists.

What the piece does execute appropriately and to great satisfaction is their desire to have a laugh and take the mick out of the current climate. It’s silly, at times funny and extremely playful. Surprisingly, each introduction to their gang of political figureheads they mock is entertaining and humorous, and often well-imagined. While Succour Punch may lack a political edge, they certainly don’t lack creativity, imagination and playfulness. They’re remarkably endearing traits, often demonstrative of a great theatrical intelligence. It’s a shame they don’t seem to know what to do with these ideas once they formulate them on stage (beyond dancing for a bit).

Iconic satirist Chris Morris recently claimed: ‘we’ve become used to a kind of satire which essentially placates the court’ and called upon comedy and satire to have ‘a bit more clout’ in this day and age if it’s to stay relevant and serving of its purpose. In the case of Bojo’s World, they’ve done little to prove that there is biting satirical theatre to be found at a price in the city. They brought the world of Facebook videos to the stage, forgetting that the joy of Facebook videos is that they’re absurdly accessible, easy and free. Although such content may be guilty of the same limp attacks on our politicians, at least its wholly original content being supported at its source. If Succour Punch wanted to emulate the Facebook video experience, it should find its place in a space where the same advantages are present. Otherwise, I’ll stay at home.