95% of people working in the Arts in Britain voted to ‘Remain’ in the EU during the referendum in 2016 and with the majority of London theatre supporting this, Julie Birchall and Jane Robins’ new play is sure to stand out. The debut play, People Like Us, written by two vocal supporters of the ‘Leave’ campaign, supposedly presents both sides of the debate in the exploration of the divisions it has created.

“No Brexit talk tonight” forcefully moans Ralph (Kamaal Hussain) slightly too forebodingly to his young French thing Clemence (Marine Andre), as they set up their North London pad for the evening’s book club. The cliché stock character of a male in his mid-life crisis has been holding book club meetings with his fellow stereotypical Oxford university grads for years. On the eve of the EU Referendum, the opening meeting’s wine filled discussion inevitably leads to the vote, as a cast of two Brexiteers and three Remainers set up for a play of increasing tensions. 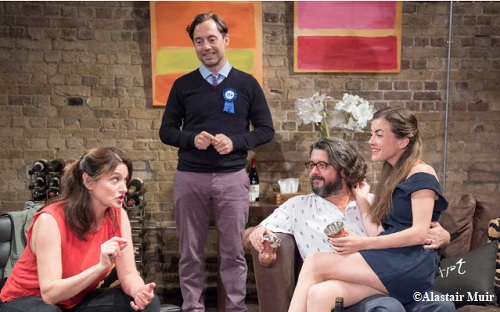 Token northerner, Frances (Sarah Toogood) and passionately flirtatious Stacey (Gemma-Germaine) represent the Leave campaigners and are clearly the favoured characters of Birchall and Robins. Another of their opposers is the overly nice, painfully on the fence Will (Paul Giddings), a walking opportunity for the two outspoken Brexiteers to make painfully unoriginal jokes of. The two characters are played intensely, with the actors capturing the passion of the beliefs. Yet Ben De Wynter’s direction is uncomfortable, limiting us to an awkwardly staged performance which the clearly very talented actors attempt to battle, with few moments of success.

An explosive outburst in the finale as Clemence and Stacey break into a fight is underwhelming. Although the badly staged fighting creates a lack of theatrical impact, there is some electricity found in Gemma-Germaine’s performance. Closing with Giddings’ unfulfilling monologue, we are given some thought of how easily our own friendships and relationships are bitterly exposed by the referendum.

It’s difficult to say that this play uniquely presents a balanced mix of views, as it is more easily described as the writers taking opportunity to freely mock the other side. If you’re a die-hard Brexiteer with an easily pleased humour, you may find this evening absolutely hilarious but if not, prepare to be either bored or offended.

Unfortunately, this play is about as exciting as a play about a book club could be - never mind the political waffle. My only hopes are that the over the next two weeks the actors are able to find some comfortability in their roles for the sake of a sold-out run.