‘The Return’ is a 30-minute, brand new, fresh concept in development, performed within the intimate space of Theatre One. The initial idea in this early-staged production is a study of a remote community and a boat returning home, conveyed using minimal dialogue, mime, dance and Foley sound effects and is an excellent example of ensemble theatre.

The actors initially entered the stage barefooted, wearing all black clothing and presented a story about a repressed community struggling for freedom under the shadow of an unseen malevolent governing figure. Whilst some searched for a new and better life across the ocean, which ultimately spirals toward tragedy, others followed the society in blind faith. 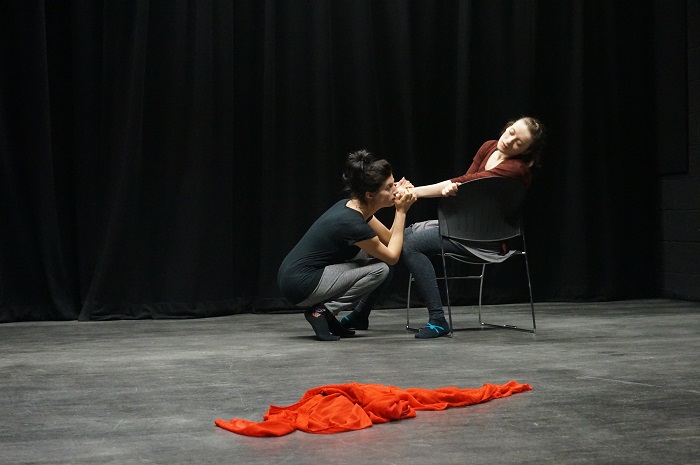 There was much to love and admire; particularly the way the actors’ body movements, physicality and breathing, was used to propel the narrative. There were many stand-out moments, including one intense scene depicting a character being submerged under water, where the opposing combination of sound and silence produced a memorable, emotional and powerful image.

This highly inventive and uniquely creative production is a little gem. With a wonderfully strong and powerful central performance from Katie Robinson, it was a privilege to be in the audience.

“Square Peg Theatre present new work, written and devised by the company and reimagine 21st century classics for the stage. With a strong physical style, they create work that blends traditional practices of storytelling with bold and original staging.” www.squarepegtheatre.co.uk