Eight men, two brooms, one stepladder and twelve oil barrels...doesn't sound like a recipe for a rip-roaring night out...but it SO is.

'Tap Factory' is a spellbinding, high energy explosion of entertainment.   You will not be disappointed -  it's fast, furious, frenetic fun!

The show is set in a factory and comprises multiple little sections of different performances.  There is a lot of comedy and great interaction between the performers.  The two main characters who draw the audience in are 'Sweeper' (Konan Kouassi) and 'Small Joe' (Dharmesh Patel).   Small Joe is new to the factory and is trying desperately to fit in and be accepted.

There is no dialogue (other than some strange, unintelligible yet hilarious banter from 'Sweeper' who really only has to give one of his intense looks or big beaming smiles to be understood) but plenty of communication through the use of comedy, rhythm and tap dancing.    The show opens with the characters of 'Sweeper' and 'Happy' (Jorffy Mayomba) mingling among the audience, presumably as a sort of warm up act.   They soon had everyone laughing. 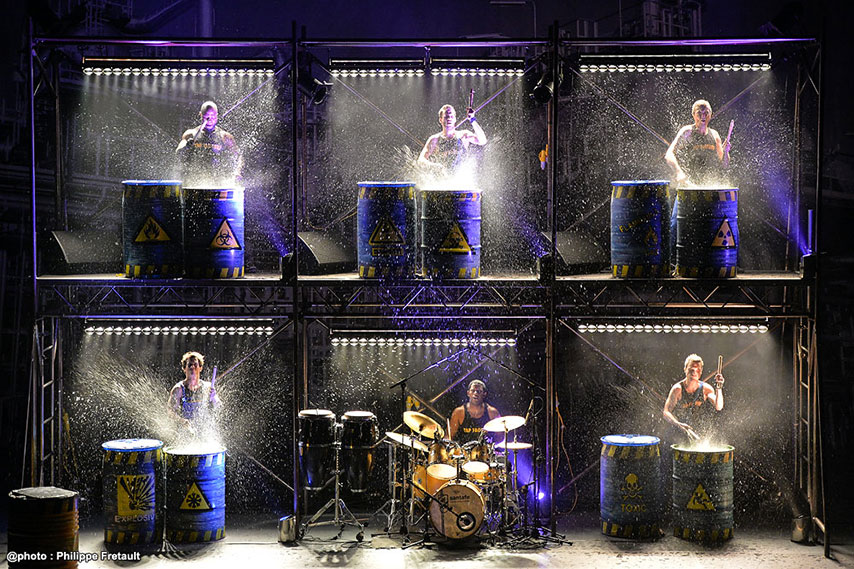 The main show then bursts into action with six drummers positioned on the scaffolding, each in their own section.   They are backlit to great effect and the thundering drumming is instantly thrilling and captivating.   There's something so life affirming about drumming and it seems to be able to reach everyone.  This was extremely powerful and energetic and so perfectly synchronised, I could have just watched them do this all night.

Obviously, there is much tap dancing throughout the show and it is simply wonderful to watch.  I don't think I have ever seen such tap dancing talent.   The synchronicity and perfect timing is stunning.

The audience are drawn in when 'Grumpy' (Lee Meadows) encourages us to copy his clapping.   All I can say is - audience:  don't give up the day job!  This section was fun and got everyone involved.

The final section involved the drums having water in them and this was visually spectacular as the drummers struck the water as they performed.   What a great way to end a wonderful, varied and exciting show.

These performers have amazing physical strength and they make everything look completely effortless.   There is precision and discipline in everything they do, as well as impressive strength and athleticism.  They are multi-talented and captivating to watch.

This show has very original staging and outstanding choreography.  There is ingenious use of props.   Although relatively simple, the lighting is used to great effect.

There were two, well deserved standing ovations tonight and the audience vibe was one of affection towards the cast who certainly earned their applause.   They were all very likeable and it was a really feel-good show.   I think everyone left the theatre with a smile on their face as the joy from the performers was infectious.

This is amazing entertainment from start to finish with a non-stop pulsating rhythm of energy and fun.    No effects, no tricks, just 100% talent (and some brooms).   A totally taptastic treat!